Because of their poor physical properties, virtually all dry, powder-like raw materials can only be granulated by means of roller compaction with mechanical force without binding agent and with only slight thermal stress.

The powder feed to the press rollers is normally carried out by means of a feed screw, which compared with rotating rollers must be sealed both on the powder side as well as at the roller faces.

The roller gap seal
There are in principle two options: The most frequently-used seals are so-called static slit diaphragms or check plates. There is also the option of sealing the roller gap with a ring shoulder roll, also called a dynamic slit diaphragm, dam-ring, or DP roller. 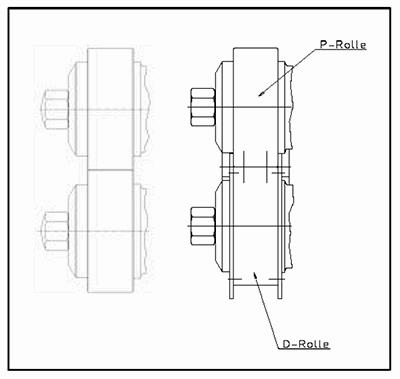 Advantages and disadvantages
With a classical seal using slit diaphragms the powder infeed speed is not linearly distributed over the width of the roller in the roller nip area because of powder wall friction and the various powder pressures caused by the rotating screws.
(See Figure). 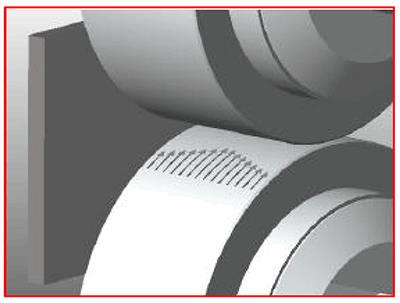 This can be seen in the compression pattern of the flakes by poorly compressed edge zones which occur in a periodic sinusoidal sequence. By feeding the powder by means of multiple screws in a double flight arrangement this occurrence is heavily reduced.

Influence of the ring shoulder height
DP rollers or dynamic slit diaphragms alter the introduction of compaction pressure into the roller gap depending on the powder to be compacted. The profile of the powder infeed speed can be almost linear if the shoulder height is optimized to the product and  geometry, which results in a more uniform pressing force induced into the powder. (See Figure)

Over compacted edge zones thus arise as well as a middle section which is insufficiently compacted. 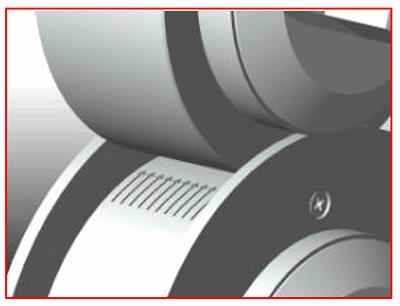 Many years of investigations in the Alexanderwerk Technical Centre with DP rollers, using roller diameters of 150 - 660mm, have shown that depending on the product the initially positive effect of the compaction force distribution can  easily slip into a negative effect if the shoulder height is not optimized. (See Figure) 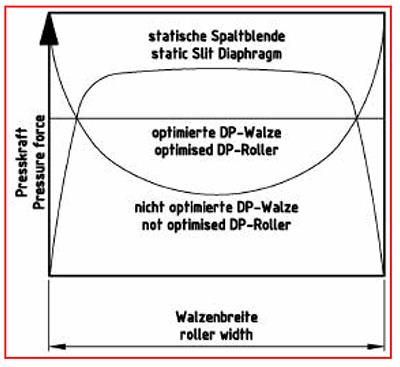 Influence of the ring shoulder height (angle?)
Minimization of the amount of uncompacted powder after the rollers requires a steep ring shoulder angle with narrow  tolerances. With such an arrangement the flakes in the ring shoulder roller are firmly squashed so that a roller scraper is continuously in operation. Because of the differential speeds of the submerged roller with respect to the ring shoulder the powder particles are subject to friction and shearing forces. For temperature-sensitive products, which tend to adher to one another, particularly pharmaceutical products, such an arrangement of the ring shoulder angle would be absolutely useless. In practice the counter angle must be significantly more shallow (approx. 75 -50°C) which however again increases the proportion of uncompacted fines, sometimes to the extent that the propogated advantages are reversed in comparison to static seals.

Sealing elements and roller scrapers
It is clearly evident that the geometrics of the sealing elements with respect to the powder feed as such and that of the roller scraper blade of the ring shoulder roller, as well as their setting and adjustment options, appear to be very much more complicated than in the case of simple static seals.

Conclusion
Obviously the objective is always to obtain a continuously constant and reproducible granulating result, in particular in  the pharmaceutical field. As a rule a poorflowing powder has to be granulated without any previous overcompaction, in order to be able to manufacture a high-quality tablet in high speed tabletting machines. The quality criteria for a granulate are for example the grain distribution and bulk density which can certainly be held constant and reproducible with conventional gap seals on Alexanderwerk pharmaceutical compactors with the following features:

In the case of new projects the question should be asked right at the beginning, whether the requirement for approximately uniform grain hardness in the granulate size distribution is absolutely necessary and hence if the DP roller route with its associated disadvantages has to be followed, or if a similar or even better tabletting result cannot be  achieved within a grain distribution with a grain hardness distribution, with the advantage of a simpler, more universal granulating machine which is not optimized to the product and geometry.

In the event of the maximum requirements, such as e.g. maximum abrasion resistance of the final granulate as well as maximum bulk densities to be achieved by mechanical compaction, which in fact hardly ever arises in the pharmaceutical area, then naturally the DP roller technology is available for consideration.

Summary
When looked at overall, the recent increasingly-propagated DP roller technology, mainly based on the pharmaceutical  area, also has its disadvantages. Whether an approximately constant granulate hardness in the granulate size distribution, which must exist in any case, is absolutely essential, should always be clarified in the case of new projects in order to reduce unnecessary development times and costs.