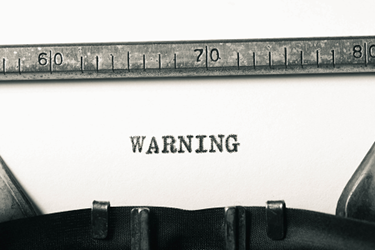 This article presents a detailed summary of the drug GMP warning letters issued in FY2018, as well as a comparison of trends since fiscal year 2013. A comprehensive GMP intelligence program includes evaluation of health authority enforcement actions, including FDA Forms 483, warning letters, seizures, recalls, and consent decree agreements. This allows manufacturers and sponsors to identify new trends in the focus of FDA inspectors and to act to address or justify similar situations at their own firms. Section 4.2 of ICH Q10, Pharmaceutical Quality System, specifies the “Monitoring of Internal and External Factors Impacting the Pharmaceutical Quality System,” including “Emerging regulations, guidance, and quality issues…”. Enforcement actions should be monitored as a component of quality issues mentioned in the Q10 guidance. Although the FDA is more transparent regarding enforcement actions than other health authorities, readers are encouraged to follow information published by Health Canada (Drug & Health Product Inspections and Inspection Tracker), Eudra GMDP reports of noncompliance, and WHO Notices of Concern.

The data presented here for FY2018, ending Sept. 31, 2018, is based on drug GMP warning letters posted by the FDA no later than Jan. 1, 2019. The data for over-the-counter (OTC) products represent CY2018, also effective Jan. 1, 2019. The number will likely increase as the FDA resumes publication of warning letters after resolution of the partial government shutdown. Thus, the OTC numbers presented here are likely an underestimate.

Following are brief highlights of noteworthy findings and trends, followed by a more detailed analysis in subsequent sections:

Table 1 shows that drug GMP warning letters more than doubled from FY2015 to FY2016 and increased again in 2017 and 2018, though not by as large a percentage. Table 1 also shows that while the FDA continues an intense focus on compounding pharmacies, the number of warning letters issued to these entities has decreased significantly for two years in a row. I doubt that this is because they have become more GMP compliant; more likely it is because many have decided to cease the compounding of sterile injectable drugs.

The FDA has continued a focus on homeopathic drug manufacturers and manufacturers of human cell and tissue products, with three and four warning letters, respectively, in 2018. The FDA continues to exercise enforcement discretion here and will intervene with enforcement actions when the public health is at risk. I expect letters to human cell and tissue firms to increase in FY2019 and beyond.

And finally, while not addressed in a table or figure, the FDA continued to cite deficiencies in process validation. Specifically, the FDA cited the failure to implement an ongoing process monitoring program to ensure that the manufacturing process remains in a state of control. This is applicable to all types of drug manufacture, including oral and topical dosage forms as well as sterile injectables. 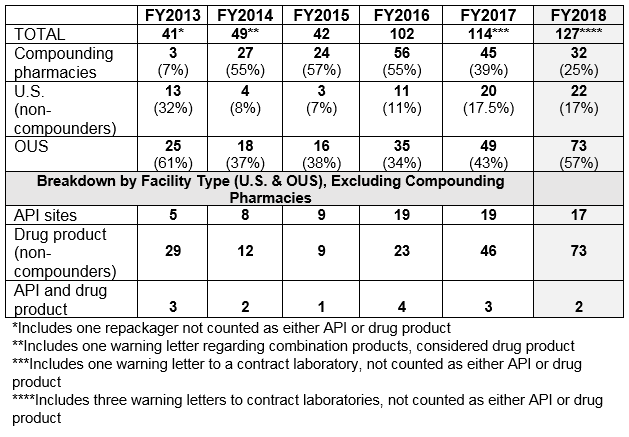 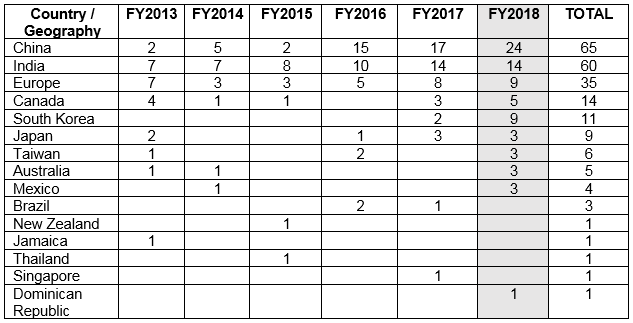 CY2018 included a dramatic focus on OTC manufacturers worldwide reminiscent of the focus on compounding pharmacies and outsourcing facilities that began in 2014. Table 3 and Figure 4 show the warning letter enforcement data on this group of manufacturers for the last 11 years. The dramatic changes began in CY2017 and increased again in CY2018. The numbers for CY2018 will likely increase beyond those reported here as additional warning letters issued in 2018 are posted in early 2019. 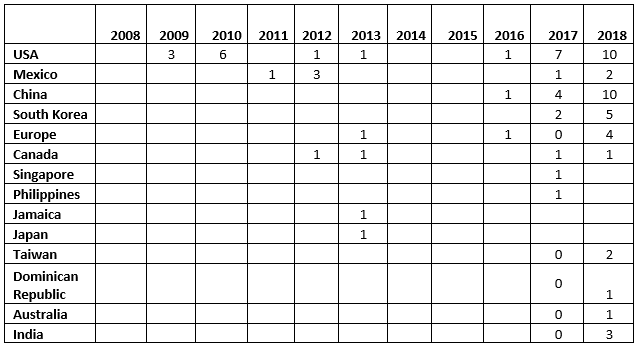 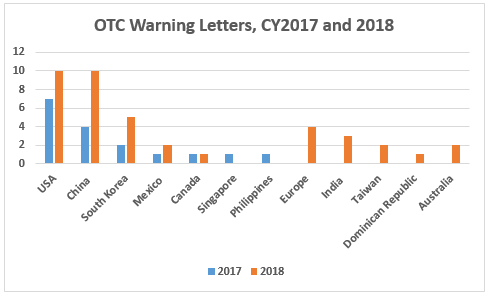 Scrutiny On Contract Manufacturers and Laboratories

FY2018 warning letters continued to focus on contracted activities, a practice that, in my opinion, will continue into the foreseeable future. At least 20 warning letters mention contracted activities, compared to at least 11 last year. Thus, 21 percent of warning letters issued to firms that were not compounding pharmacies were directly associated with contract manufacturing or testing. Five sites were located each in South Korea, China, and the U.S.; Europe had three sites and Australia had two, as shown in Table 4. 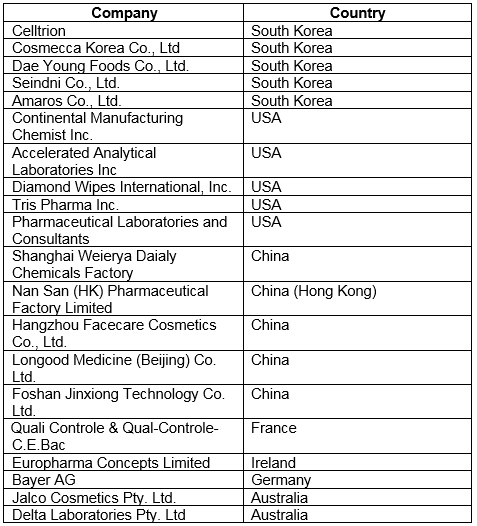 Table 6 shows the number of warning letters issued both inside and outside the U.S. that included references to data management and data integrity. This group and analysis excludes those warning letters issued to compounding pharmacies. Warning letters referencing data integrity deficiencies continue to identify the predicate rule(s) to which firms did not adhere. Figure 5 provides a graphic representation of the data. The percentages for both U.S. and OUS warning letters have consistently decreased between FY2016 and FY2018; perhaps we’ve turned the corner here, but we still have a long way to go to eliminate this problem. 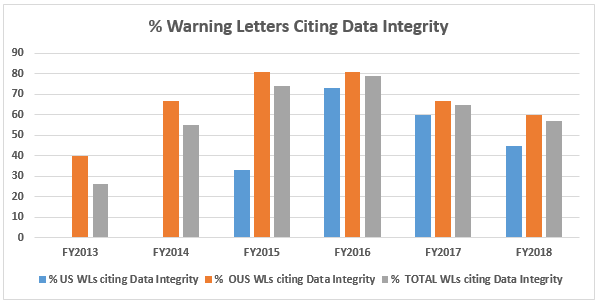 Intervals Between Inspection and Warning Letter

Table 8 and Figure 7 show that the interval between the inspection and imposition of an import alert decreased in FY2018 compared with FY2017. These data include only those associated with warning letters and may not be representative of import alert timing for firms that do not receive a warning letter. Though only three years are represented here, the time interval has consistently decreased. The import alerts addressed here include failure to follow GMPs (Import Alert 66-40) and refusal of inspection by a foreign establishment (Import Alert 99-32). 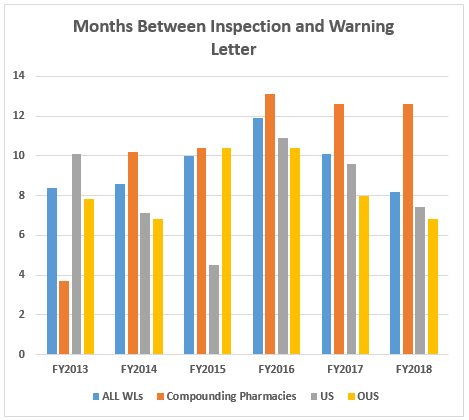 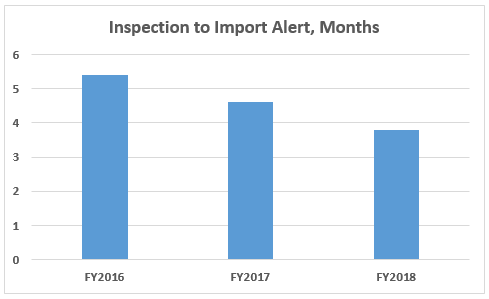 FY2018 saw another year of increase in the number of drug GMP warning letters issued by the FDA, though it is not as dramatic a difference as in some previous years.

Compounding pharmacies and outsourcing facilities continue to receive enforcement attention, though we seem to have officially turned the corner here with declining numbers and percentages of warning letters issued to this group for two consecutive years.  We will continue to monitor this metric and see whether FY2019 shows a similar decline.

Contract manufacturers and their sponsors were a focus again this year, and I would expect that to continue and expand in FY2019. Some sponsors will only take their responsibilities for selection and oversight of contract manufacturers seriously if they suffer an economic impact, such as a contract manufacturer that is subject to a serious enforcement action that results in a delay to product approval or a cessation of manufacturing to undertake necessary facility and equipment remediation.

The breakaway category for warning letters in FY2018 was manufacturers of OTC drug products.  This group, on the whole, appears to have failures in fundamental aspects of GMP, including the need for an effective quality unit, testing of incoming materials and components rather than simple reliance on the supplier’s certificate of analysis, testing of product prior to release to the market, and failure to have real-time data to support expiry labeling.

Now, where are we heading in 2019?  Overall, look for the following trends in warning letter enforcement actions:

Barbara Unger formed Unger Consulting, Inc. in December 2014 to provide GMP auditing and regulatory intelligence services to the pharmaceutical industry, including auditing and remediation in GMP areas including data management and data integrity. Her auditing experience includes leadership of the Amgen corporate GMP audit group for APIs and quality systems. She also developed, implemented, and maintained the GMP regulatory intelligence program for eight years at Amgen. This included surveillance, analysis, and communication of GMP-related legislation, regulations, guidance, and industry compliance enforcement trends. Unger was the first chairperson of the Rx-360 Monitoring and Reporting work group (2009 to 2014) that summarized and published relevant GMP- and supply chain-related laws, regulations, and guidance. She also served as the chairperson of the Midwest Discussion Group GMP-Intelligence sub-group from 2010 to 2014. She is currently the co-lead of the Rx-360 Data Integrity Working Group. You can contact her at bwunger123@gmail.com.