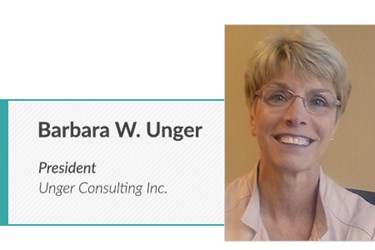 Each spring, the FDA publishes data on its website related to Form 483 inspection observations and warning letters issued by the Center for Drug Evaluation and Research (CDER) during the previous fiscal year. By analyzing this annual data — and comparing it to that of other recent fiscal years — pharmaceutical and biopharmaceutical manufacturers can gain a clearer picture of FDA enforcement trends and their potential impact on business and the industry as a whole.

In this article, we will compare results from the FDA’s 2015 fiscal year with results from fiscal years 2013 and 2014. We will start with the inspection observations and determine which were the most common citations, providing potential reasons for obvious changes in 2015 over previous years. It is important to note that the data published on the FDA website represents only Form 483s that were reported via the FDA’s Turbo EIR automated reporting system — manually prepared 483s are not published online and thus are not part of my analysis.

After reviewing the inspection observations, we will move on to CDER GMP warning letters from the same time period and look at product category, geography, and trends in deficiencies that are cited. Appendices 1 through 3 provide listing and links to the warning letters for each of the fiscal years.

The annual number of CDER inspection observations did not change significantly between FY 2013 and FY2015, even though there are some slight increases in the frequency of certain observations. These changes may represent an increased focus on compounding pharmacies and outsourcing facilities, though data is not available to confirm this theory. Remember that this data does not include all 483 observations, only those prepared within the Turbo EIR system.

Drug GMP warning letters issued to compounding pharmacies increased dramatically from FY2013 to FY2014 and 2015. This represents an unusual enforcement focus on a single segment of the drug industry. FDA’s legal authority over these entities was clarified in the Compounding Quality Act, part of the Drug Quality and Safety Act signed into law in November 2013, and explains the apparent explosion of enforcement action.  FDA Office of Regulatory Affairs (ORA) statistics show that approximately 3% of inspections result in warning letters, but for compounding pharmacies and outsourcing facilities the value is close to 40%, according to Lachman Consultants.

Between FY 2013 and 2015, many of the warning letters issued regarding sites located outside the U.S. identified deficiencies in data integrity / data management. I will explore this trend — along with a review of recent data integrity-related guidances from FDA and the World Health Organization (WHO) — in my next article.

The following data is based on inspections generated using the FDA Turbo-EIR system.  Data from inspections of API manufacturers and form 483s generated outside the system are not included.  Data in the Table 1 is collated based on data from the FDA website with one difference. Some citations, such as 21 CFR 211.192, are actually divided into several line items throughout the FDA tables; I’ve consolidated them into a single line item.  The same change has been made for each of the line items.

Figure 1 shows the above group of inspection observations graphed over the three fiscal years.  While there is some variation from year to year, the frequency with which specific regulations are identified remains fairly constant. 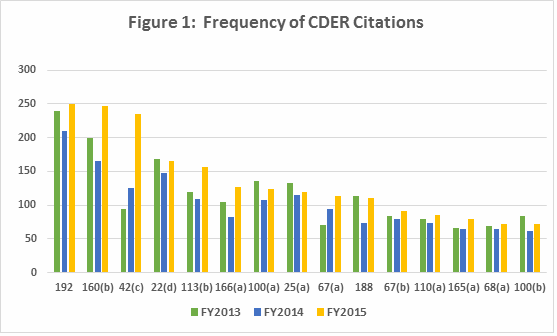 Figure 2 shows additional detail of several areas where the frequency of the observation was higher in FY2015 than in the two previous years.  This change could be due to the specific form 483s that were generated within the Turbo-EIR system. Alternatively, it’s possible that they are due to FDA’s intense focus on compounding pharmacy and outsourcing facility inspections. Many of these facilities have inspection observations in these four areas:  the absence of scientifically sound specifications, lack of appropriately segregated facility areas to prevent contamination, lack of validation of aseptic processes including sterilization, and expiry dating that is not supported by stability data.  It is impossible to know the real reason why the frequency of these citations has increased. 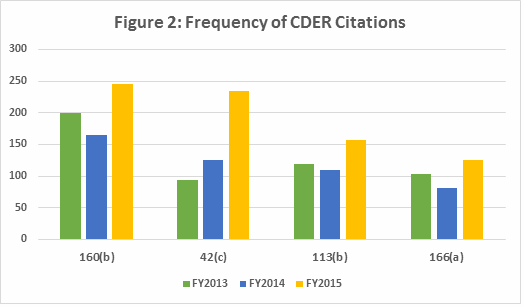 In conclusion, there is little change in the overall frequency of inspection observations, as characterized by the regulation cited, between FY2013 and 2015. The most frequent observations cite 211.192 (investigations), 211.160(b) (scientifically sound specifications) and 211.42(c) (validation of aseptic processes including sterilization).   Where increases in specific observations are noted in Figure 2, it may be due to FDAs focus on inspections of compounding pharmacies and outsourcing facilities, for which these are frequent observations. Data is not available to validate this possible conclusion.

In this section, we turn to drug GMP warning letters in FDA fiscal years 2013 through 2015.  Appendices 1 through 3 provide tabulations of warning letters from each of the three years that identify product type covered in the letter, the issuing office, number of deficiencies identified, and the country in which the sites in question are located.  Links to each of the warning letters are also provided.

Table 2 shows that the number and percent of warning letters issued to compounding pharmacies increased dramatically between FY2013 and FY2015.  This represents an unusual enforcement focus on a single segment of the pharmaceutical industry.  FDA’s legal authority over these entities was clarified in the Drug Quality Security Act (DQSA) legislation, signed in November 2013, and explains the apparent explosion of enforcement action.  Most of the compounding pharmacies that received these warning letters manufactured sterile injectable products.  When removing compounding pharmacies from consideration, Table 2 also shows a dramatic drop in official enforcement actions against pharmaceutical firms in the U.S. and a continued focus on sites OUS. The numbers and percentage, however, have decreased since FY2013.  This is perhaps due to the focus on the domestic compounding pharmacy industry.

* Includes one repackager not counted as either API or drug product

The involvement of API sites in warning letters has almost doubled since FY2013.  The number of non-compounding drug product sites has decreased by over half, again likely due to the FDA’s focus on compounding pharmacies and outsourcing facilities.  As the percentage of warning letters issued to compounding pharmacies has increased, those issued to pharmaceutical manufacturers both inside and outside the U.S. has diminished.  This seems to represent FDA’s allocation of its limited inspection resources. Figure 3 shows the high-level data presented in Table 2. 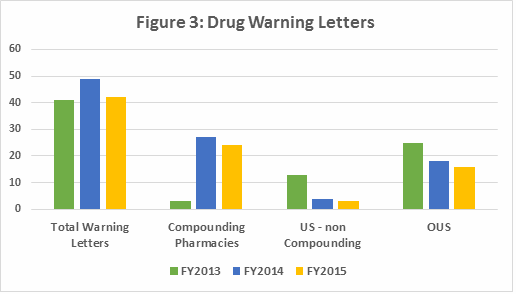 Figure 4 shows data regarding type of manufacturing site associated with warning letters, excluding compounding pharmacies.  The focus on API sites has increased and the number of drug product sites has diminished over the time period. 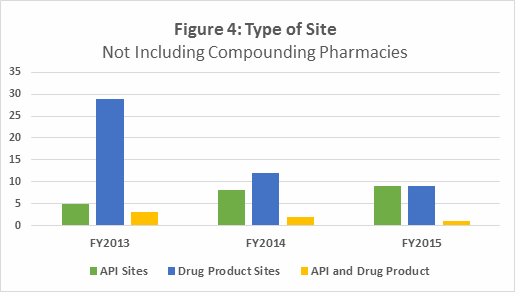 Table 3 shows the geographic distribution of warning letters issued outside the U.S.  European countries are counted together since only in one year, FY2013, did any of the countries receive more than one warning letter. European area countries included over the three years include Ireland, Spain, Czech Republic, Italy, Portugal, Denmark, Austria, Netherlands, and Germany. The decrease in warning letters issued to European sites may represent an “unofficial” reliance on EMA inspections of sites located in this area, even in the absence of an official mutual recognition agreement (MRA).

India received the highest number of warning letters issued to a single country, with China coming in second.  Over this time period, inspections in China have been limited by the number of visas issued to FDA investigators.  Thus, one should not assume the industry in India has more problems than the industry in China.  For those who like graphs rather than tables (like me!), Figure 5 shows the same information as Table 3. 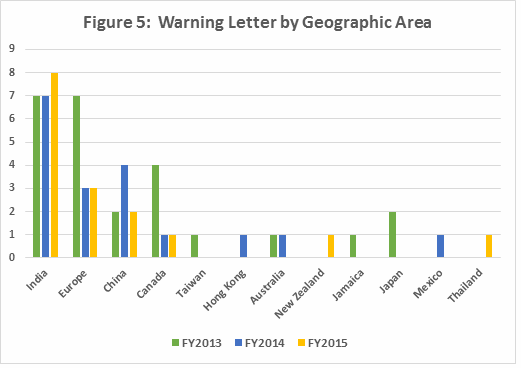 Last year seemed to show an increase in the interval between inspection and warning letter issuance.  Here we provide several years-worth of data to demonstrate this is generally true, with a couple of exceptions.  We start with FY2013 and include 1HFY2016.  Data is provided for the total number of warning letters, those issued to compounding pharmacies / outsourcing facilities, pharma firms in the US and outside the US.  When two or more inspections were mentioned in a warning letter, I took the date nearest to the warning letter issued, under the assumption (perhaps incorrect) that the final inspection provided the incentive that made the warning letter issuance appropriate.   When tabulating the individual intervals, they are rounded to the nearest half month.

Table 4 shows the interval between inspections and warning letter issuance for the fiscal years in question.  Figure 6 provides a graphic representation of the data.  Also see Table 1 for the number of warning letters in each of the FY categories.

Table 4:  Interval Between Inspection and Warning Letter in Months

Barbara Unger formed Unger Consulting, Inc. in December 2014 to provide GMP auditing and regulatory intelligence services to the pharmaceutical industry. She has extensive expertise in this area having developed, implemented, and maintained the GMP regulatory intelligence program for eight years at Amgen Inc. This included surveillance, analysis, and communication of GMP related legislation, regulations, guidance, and industry compliance enforcement trends. Barbara was the first chairperson of the Rx-360 Monitoring and Reporting work group (2009 to 2014) that summarized and published relevant GMP and supply chain related laws, regulations, and guidance. She also served as the chairperson of the Midwest Discussion Group GMP-Intelligence sub-group from 2010 to 2014.

Before Amgen, Barbara worked for the consulting firm Don Hill and Associates, providing regulatory and quality services to the pharmaceutical industry, and for Eli Lilly and Company in quality and CMC regulatory affairs positions. She began her career in the pharmaceutical / device industry with Hybritech Inc. and received a bachelor's degree in chemistry from the University of Illinois in Urbana Illinois.