An Introduction to High Containment For Lyophilization Processes 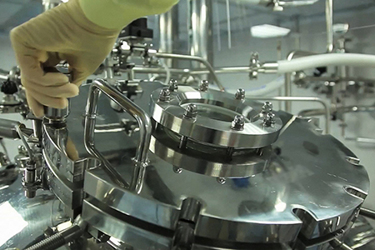 Lyophilization is an important concept in today’s pharmaceutical and biopharma industries, but it’s actually a years-old process that dates all the way back into the late nineteenth century.

Lyophilization transforms drug products and substances from a liquid to a stable solid by removing water or other solvents. It works based on a simple principle of physics called sublimation. Sublimation is the process of transitioning a substance from a solid to a vapor state without passing through an intermediate liquid phase. Drug developers have been interested in this technique for years as it can extend the shelf life of both small and large molecule drugs.

Freeze drying as an industrial process began as early as 1890 by Richard Altmann who devised a method to freeze dry tissues (either plant or animal), but went virtually unnoticed until the 1930s.[1] A major milestone for freeze drying then occurred during World War II, with the need for significant amounts of blood plasma and penicillin to treat the wounded in the field. Because of the lack of refrigerated transport, much of the supplies ended up spoiling before reaching their patients, thus the freeze-drying process was developed as a commercial technique. The freeze-dried blood plasma and penicillin were then rendered chemically stable and viable for transport without refrigeration. In the 1950s–1960s, freeze drying began to be viewed as a multi-purpose tool for both pharmaceuticals and food processing.[2] Nowadays, almost every pharmaceutical and biopharma lab in the world are using lyophilization in their daily processes. Some of the typical pharmaceutical products that would undergo lyophilization include bulk pharmaceutical/biopharmaceutical ingredients, protein, collagen, peptide, oligonucleotides, chemical API, enzymes, and mAbs.

This white paper explores the advantages and disadvantages of lyophilization as well as lyophilizer solution examples and containment designs.