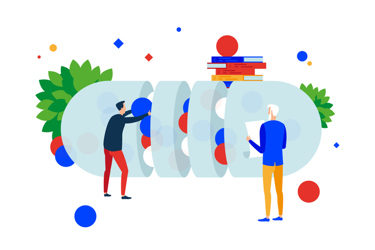 Quality or state of control at the time of filing does not guarantee ongoing quality and control throughout the product life cycle. Maintaining a state of control, maintenance of commercial operations, and making improvements requires continued oversight. In the context of ongoing oversight or monitoring, this guide uses the FDA’s preferred term “continued”2 rather than “continuous”3 to distinguish from continuous manufacturing. Both batch and continuous processes require continued monitoring and verification.

The traditional three-batch validation of pharmaceutical finished products has been replaced by the continued monitoring of product and process, referred to as continued process verification.2 In the process industries, the approach taken is that enough batches are monitored to allow calculation of the probability of deviations from the mean for future batches. However, this assumes common cause variation (CCV, inherent variability) only, with batch results fluctuating randomly around the mean and not showing any trend.

Excipient users should also be aware of the risk of unpredicted events, including out of trend (OOT) and out of specification (OOS, failure), due to special cause variation (SCV). Unfortunately, prior compliance is not predictive of such events; thus, continued monitoring as part of the control strategy (CS) is essential to provide early warning. However, the onset of SCV may not always be easily detectable and can be difficult to distinguish from background CCV.

A one-off validation gives a false sense of security. Even if nominally within the parameters of the validation, the cumulative impact of multiple changes and univariate change control allows product drift, which predisposes it to SCV and sudden product failure. Continued monitoring is essential to ensure fidelity to the original models and assumptions upon which product approval was granted. Drift and SCV will invalidate that which was validated and disestablish established conditions.

Continued multivariate monitoring is preferred since quality itself is multivariate. Individual attributes may remain within univariate limits but interact to cause quality problems. Traditional change control and comparability protocols are univariate. If the product remains in specification before and after a change, then that change is approved. A sequence of one step at a time changes can be similarly approved during the product life cycle. However, sequential compliance may mask product drift, which might only be detected by a trend in multivariate product data. Drift itself is not fatal, but if it leads to the interaction of an excipient variability with a criticality in the finished product, sudden failure may ensue. Drift may not be reflected in the specification attributes. Detection of drift by multivariate monitoring of all data, not just specification compliance, gives the best chance of detecting subtle changes early enough to investigate cause and take preventive measures before failure.

Another advantage of applying multivariate analysis (MVA) to excipient data is that it provides a convenient means of demonstrating user oversight of excipient quality, as required by cGMP.

MVA allows information extraction from large, complex data sets in a manner not achievable by simple univariate statistical process control (SPC), where anything but the strongest correlations will be confounded by the interaction of multiple possibly correlated variables. Software may be required, and the reader should study the information provided by the software suppliers and/or the literature on statistics to determine which of the many available MVA techniques is suitable.

Principal component analysis (PCA) is one of the more commonly used techniques where large data sets with correlated measures are organized into a smaller set of uncorrelated variables, the principal components (PCs). If two or three PCs are enough to explain variability, then variability can be visualized in two or three dimensions. Mathematically, larger numbers of PCs can be used if required.

“Assuring that during routine production the process remains in a state of control.”2

This same thinking can be applied to the finished pharmaceutical product. MVA can aid in monitoring manufacturing trends and assessing the continued relevance of the DS and CS, since it will encompass/summarize a broad range of underlying attributes.

Trends and OOS data for both finished product and excipients should be understood and addressed by the excipient users. MVA may help determine the underlying causes of such changes since it will aid in the identification of those excipient attributes that have the most impact on finished product quality.  Although excipient manufacturers may monitor trends in their excipients, they are typically unaware of how excipient trends impact the finished drug product.

Excipient-related Special Cause Variation In Production

Several hundred batches of pharmaceutical product may have been manufactured within specification, but that does not mean that the next batch will also meet specification. There is always the possibility of special cause variation. Because such “black swan” events5 are unexpected and unpredictable, there is no definitive way to avoid them. However, it may be possible to mitigate the risk from black swan events by continued multivariate monitoring, including excipients and APIs. The more that APIs and excipients are understood, the less likely there will be issues triggered by special cause variation. This increased understanding should continue throughout the pharmaceutical product life cycle.

Supplier Qualification And Multi-Sourcing With Regard To Product Performance

In the absence of a CMA, the specification for an excipient should default to mandatory pharmacopeial standards. It is important to note that some attributes in the monographs do not have acceptance criteria, usually in the labeling section of USP/NF monographs or the functionality related characteristics (FRC) section of Ph. Eur. monographs. These attributes are non-mandatory and, if not critical, should not be (over) specified. Not only can limits vary from supplier to supplier but also the methods, making specification equivalence difficult to determine.

Qualifying multiple sources should be considered when establishing the design space, to reduce the time required to switch to an alternative supply after launch.

Note: If an alternative excipient source is qualified during development, the regulatory agencies will expect that it is used routinely during commercial manufacture in order to be interchangeable in the future. Without such routine use, it would be necessary to requalify the excipient prior to use. This restriction ensures that any changes in the alternate source material (and the finished product and its processes) between original qualification and the switch date are properly assessed.

Depending on the change and its potential impact on pharmaceutical finished product performance, it may be necessary for excipient users to inform the relevant regulatory authorities via either a supplemental filing such as a Prior Approval Supplement (PAS) or a Type II Variation for highest-risk changes, Changes Being Effected or Type I Variations (CBE 0/IA or CBE 30/IB) for intermediate risks, or an annual report/product quality review for minor changes, as assessed by the excipient user.

It should also be remembered that not all changes to an excipient will be detrimental to the performance of the excipient or the pharmaceutical finished product.  However, unless it can be scientifically justified as not a significant change, it should be assumed that all changes should be notified to the excipient user.6

Access to excipient manufacturers’ data can accelerate product development and increase product robustness with respect to the impact of excipient variability. Such access requires collaboration.  It is recommended that discussions/collaboration be conducted under a two-way confidentiality agreement, as pharmaceutically aligned excipient manufacturers cannot help if they are unaware of the application. The excipient manufacturer can help to identify CMAs for design-critical excipients during development and provide CMAs to counter special cause variation during the finished product life cycle. Continued multivariate monitoring of excipient data for drift may preempt drift and quality problems in the finished product.

“What is more malleable is always superior over that which is immovable. This is the principle of controlling things by going along with them, of mastery through adaptation.” - Lao Tzu

This article has been adapted from the CPhI 2021 New Year Report: Post Pandemic Trends & Excipient QbD.