Co-promotion gaining at expense of co-marketing

With the rise of biotechnology over the last 20 years, licensing agreements have become a crucial tool in pharmaceutical companies' efforts to maintain a healthy product flow and to access novel technologies. As agreements have become more complex over the last decade, both biotechnology and pharmaceutical companies are facing a range of difficult choices in licensing negotiations.

Co-promotion offers highest potential payments
According to Datamonitor's primary research, co-promotion is the most attractive agreement type for both in- and out-licensers. It offers the highest potential payments for the out-licenser and increased promotional effectiveness compared to other licensing agreements. Co-promotion agreements also tend to be much more flexible than co-marketing agreements, in that the partners can decide what type of payments they prefer. For example, partners can choose either profit sharing without royalty payments or higher royalties on sales.

The following figure illustrates the high total payments that can potentially be derived from co-promotion agreements in comparison to other licensing options. 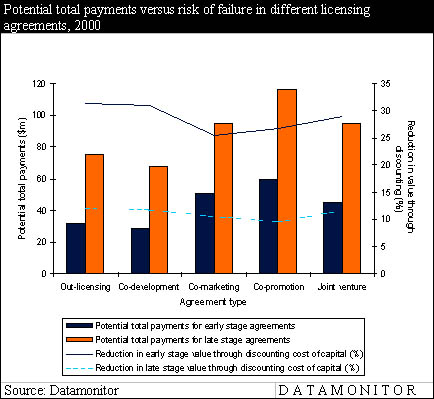 Co-marketing still valuable
Although co-promotion attracts more companies than co-marketing because of its potential to significantly increase sales force effectiveness, co-marketing offers more opportunities than may first be thought. Due to the lower payments expected by the out-licenser, co-marketing is particularly suited to in-licensers with cash constraints. In early stage co-marketing agreements, the average maximum up-front payment is $16m and the royalty rate around 18%. In late stage licensing, the payments are also significantly lower than for co-promotion, with up-front payments around $39m and royalties at 24% of sales. These findings are illustrated in the following figure and table. 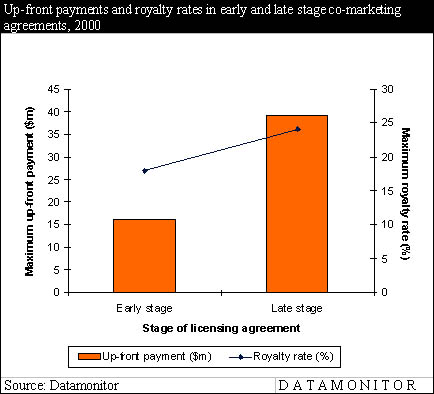 "In terms of further benefits offered by co-marketing, Datamonitor's primary research found that if the targeted market is large enough, co-marketing may offer a higher return on investment than co-promotion. This is due to the higher sales leverage that the in-licenser may achieve by marketing a different brand on its own, in turn benefiting the out-licenser through higher royalties."

Also, in some markets, including Italy and Spain, the same product cannot be marketed under the same brand name by two different companies. Therefore, in this case, co-marketing is the only option for in-licensers interested in entering a new therapeutic market by gaining sales and marketing expertise in this area.

For more information, contact Elisabeth Overend-Freeman of Datamonitor at 212-686-7400 ext. 765 or efreeman@datamonitor.com.