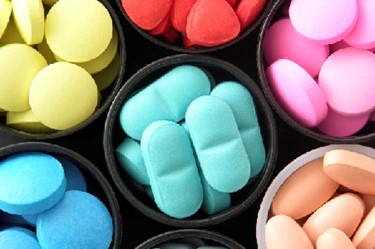 The compressed tablet is one of the most widely prescribed oral solid dosage forms in use today. Typically the ingredients which comprise the tablet blend include the active pharmaceutical ingredient (API) together with various excipients which not only act as carriers for the drug compound, but which also enhance its therapeutic effect, or efficacy. In order for the tablet press to produce quality tablets, it is imperative that the blend of ingredients sent to the press be dry and of uniform particle size. In addition, it is important that the API be evenly distributed within each tablet that is produced. If this cannot be done simply through adequate blending, the ingredients must go through an additional granulation step prior to the compression step of the press in order to ensure an even distribution of the API in the final tablet.

Three different techniques can be utilized for preparation of the mix prior to the compression stage: direct compression, dry granulation, or wet granulation. Direct compression is ideal for powders which can be mixed well and do not require further granulation steps prior to introduction to the tablet press. Dry granulation refers to the process steps of blending the ingredients followed by compaction and size reduction of the mix in order to produce a granular, free flowing blend of uniform size. Finally, wet granulation involves the production of a granule by the addition of liquid binders to the powder mixture.