Could Microbiome-Based Therapies Upend The Asthma And COPD Markets? 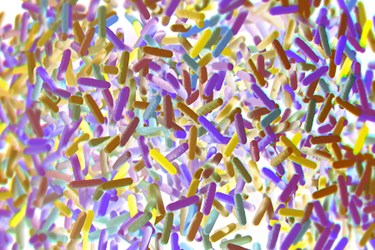 The human microbiome is understood to have a profound impact on human health. The gut microbiome is the most studied niche, and a plethora of evidence has linked the it to a variety of diseases, including such diverse indications as metabolic syndrome, melanoma, and major depressive disorder. Numerous pharmaceutical companies are building on the ongoing academic and clinical research to commercialize treatments that interact with this microbial community to impact disease. DRG’s recent forecast shows the potential of some of these therapies to be in the hundreds of millions of dollars, and with much of the clinical data still preliminary, this figure could climb even higher.

Although the majority of microbiome-based therapies currently in development are targeting diseases either where the gut microbiome acts directly (e.g., ulcerative colitis) or where strong associations have been demonstrated between a certain microbiome state and a desired clinical outcome (e.g., solid tumors), understanding the ability of the microbiome to regulate circulating inflammatory modulators would unlock an enormous potential to impact human health and disease. Respiratory diseases are an appealing target for future development, with the combined asthma and chronic obstructive pulmonary disease (COPD) market approaching $30 billion by 2020 in the U.S. alone, and with significant unmet needs remaining in both markets. Microbiome-based therapies, if successful, could have an enormous impact on these serious diseases.

The Microbiome In Asthma: A Preventive Strategy?

The lungs and upper respiratory tract play host to their own ecosystem, distinct from the gut microbiome, and links between these two populations are beginning to be studied. The role of the microbiome in asthma begins in childhood and is initially driven by the gut population, with a strong association between Caesarean section deliveries and later development of allergic asthma, likely due to a differentiated infant gut microbiome compared with vaginally delivered infants.1,2 The leading hypothesis explaining the link between the gut and asthma relies on the microbiome’s ability to regulate circulating inflammatory modulators.3 The relationship between specific microbes and specific inflammatory markers remains to be elucidated, but academic research detailing these links is ongoing. The lung microbiome is also understood to play a role in asthma, especially in adult patients, with the long-term resident microbial community different in asthma and healthy patients.4,5,6 Viral infections, rather than bacterial changes, are associated with exacerbations, but other infectious agents including the bacteria associated with pneumonia have been hypothesized to play a role.7

Current treatments for asthma are broken down into acute and maintenance therapies, and none yet target the microbiome, although some have been shown to impact it, most notably inhaled and oral corticosteroids.6 Acute therapies are used to relieve exacerbations, while maintenance therapies are selected to control long-term inflammation and prevent exacerbations. Despite the availability of targeted anti-inflammatory therapies, including lucrative biologics, physicians continue to report an unmet need for therapies capable of reducing exacerbations and helping severe patients achieve control of their diseases. The microbiome is already being proposed as an option to fulfill this unmet need, either through treatments targeted to specific microbes (as opposed to broad-spectrum antibiotics currently used) or through delivery of live bacteria.4

Two scenarios could play out for microbiome-based therapies in asthma. The first is a therapy that could reduce exacerbation frequency in patients whose symptoms are uncontrolled by inhaled therapies, and who therefore are eligible for biologic treatment. To secure an approval, such a therapy would likely need to follow in the footsteps of the recent wave of biologics and demonstrate a reduction in exacerbations along with symptom control. Leading researchers interviewed for their opinions on emerging microbiome-based therapies emphasized that clinical trials must include indication-specific endpoints. However, these experts also expect that if such endpoints are achieved, the FDA will likely approve, and insurance companies will reimburse, such a treatment. If a microbiome-based therapy for asthma positioned itself as a competitor to existing biologics, it would most likely reach asthma patients at British Thoracic Society (BTS) Step 4 or 5 — these patients’ symptoms are poorly controlled by usual inhaled medications and are typically prescribed an add-on treatment or even long-term use of oral corticosteroids (OCS). DRG’s epidemiological analysis reveals that in the United States in 2019, more than 2.5 million medically treated patients at BTS Step 4 or 5 remain symptomatic and so are eligible for additional therapy. If we assume that a new microbiome-based therapy launches at a substantial discount to current biologics, the price could be about $10,000 per year. This price is a premium over a single inhaler regimen but is considerably less than the price tag for emerging biologic therapies, which are forecast to soar as high as $40,000 per year. This discount could help a microbiome therapy reach patient shares of >1 percent in the BTS 4 or 5 patient population, boosting it above $250 million in sales in the first year, with room to grow. A higher price point remains possible, should clinical results support it, while this lower price could boost it to higher patient shares. Either way, such a treatment would secure a strong position in the asthma market.

The second scenario is a therapy that can modulate the immune system and completely control symptoms, basically “curing” patients of their asthma. Unlike a gene therapy or other short-term treatment that can cure a disease, a live bacterial therapy would likely be dosed chronically — a patient’s microbiome is subject to perturbations based on diet, environmental, or behavioral changes, so continued re-seeding of the beneficial bacteria would be required. If we assume a therapy is dosed daily, or even on a weekly recurring schedule, a price in line with inhaled therapies is likely. However, the inhaled therapies market is expected to become increasingly genericized over the next decade, so a microbiome-based anti-inflammatory treatment might reasonably expect a price point of $2,000 to $4,000 per patient per year. If used in earlier lines of therapy — such as BTS step 2 or 3, where maintenance treatments are indicated — the targetable patient population would be more than 3.6 million patients in the U.S. alone. The less-expensive inhaled maintenance treatments reach a much higher total patient share than costly biologics, but the plethora of choices has fragmented the market. An ambitious patient share of 5 percent could be possible if this treatment replaces a substantial portion of LABA/ICS (long-acting beta agonists / inhaled corticosteroids) prescriptions, but a more reasonable assumption of around 2 percent patient share as an add-on therapy would help this hypothetical microbiome-based treatment reach about $125 million to $300 million in annual sales. 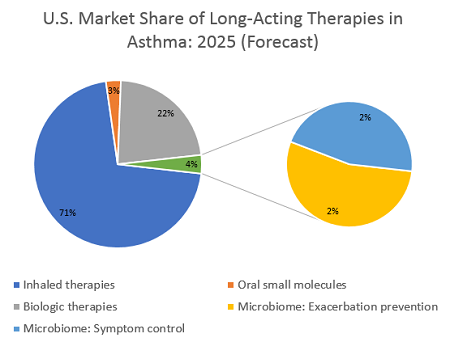 The financial outlook in COPD is somewhat similar to that in asthma, despite critical differences between these two diseases. COPD usually originates after chronic exposure to a substance that damages the lung; in developed nations, cigarette smoking is the primary cause. This exposure leads to long-term degradation of lung function, with airways losing elasticity and becoming inflamed. Circulating inflammatory factors lead to further systemic damage, and many patients end up with excess mucus, creating an environment prone to dysbiotic bacterial or viral infections. The lung microbiome in COPD is dynamic, changing with the severity of the disease and during exacerbations, as well as in response to steroids and antibiotics.8,9 Additionally, the gut-lung axis may be involved in the systemic inflammatory response found in many COPD patients, and the damage done by cigarette smoke seems to have a distal impact on the health of the gut microbiome.10

What microbiome-based therapies could be targeted at COPD, and what outcomes could they expect? As with asthma, a therapy capable of controlling exacerbations would help fulfill a substantial unmet need in COPD. Since the inflammatory response in COPD originates in the lungs, rather than being driven by circulating inflammatory agents, a therapy that targets the gut microbiome might not have the desired impact or could be harder to develop. However, there is the potential for an enormous payoff: Exacerbations in COPD are more frequent and more expensive than in asthma, and they frequently lead to additional complications, including death.11,12,13 As a consequence, a microbiome-based therapy that achieves FDA approval for a reduction in exacerbations — or even the holy grail of COPD, a reduction in all-cause mortality — could demand a very high price.

No biologic therapy has yet reached the COPD market, and none are currently forecast to do so. Hence, benchmarking to a current inhaled therapy is unrealistic. Previous DRG forecasts estimated that a therapy launching in both asthma and COPD would have the same price in both markets, but I estimate that a differentiated microbiome-based treatment in COPD could justify at least double the price of our earlier hypothetical therapy in asthma, based on the higher costs and greater frequency of exacerbations in this disease, and charge $20,000 per year. The lack of any biologic agent in COPD could even justify a higher price, if payers are convinced of the clinical benefit. Such a therapy would likely be reserved for severe and very severe patients, of which there are about 3 million in the U.S., and if it reaches even 0.5 percent of these, it could surpass $300 million in sales.

However, a lower-cost therapy that treats inflammatory complications of COPD could reach an even higher sales figure. As with asthma, it is theoretically possible to develop a microbiome-based systemic anti-inflammatory therapy, delivering a maintenance treatment either to the gut or the lung to stabilize a COPD patient’s microbial ecosystem and supplement with beneficial bacteria. If such a therapy is priced in line with the current higher-cost inhaled treatments, a price point around $3,000 to $4,000 per year is realistic. Some inhalers are priced above this benchmark, but with generics increasingly widespread, this lower cost might help a microbiome-based therapy be more competitive. Additionally, assuming a share of about 5 percent of the total COPD market, which in the U.S. represents around 8 million diagnosed, drug-treated patients, sales would reach $1.2 billion to $1.6 billion per year. Such sales would put it at 10 percent of the total value of the COPD market, an ambitious figure. As a novel mechanism at a competitive price, and assuming the anti-inflammatory impacts truly improve health outcomes, this estimate is in line with the forecast for more recently launched inhaled therapies and could be readily achieved.

The biggest assumption in the above discussion is that a microbiome-based treatment could demonstrate clinical improvements in these respiratory diseases. Academic researchers have suggested this possibility, but no formulations have yet reached clinical phase-development.10,14,15 4D Pharma, a microbiome-based clinical-stage developer, has an asset in preclinical development for severe asthma, particularly targeted at neutrophilic patients. Other microbiome developers are investigating various allergic diseases, but none have yet targeted COPD. With a combined total value in the billions for targeting just these two respiratory diseases, it is easy to see why the microbiome space is an attractive area for research and development. Major pharmaceutical companies are increasingly partnering with or buying assets from smaller developers, and academic research continues to advance. This is a high-risk, high-reward space, but as respiratory markets become increasingly crowded, a novel treatment addressing the serious unmet need for anti-inflammatory therapies that offer disease control could be a breakthrough, blockbuster treatment and well worth the investment.

Kristine Mackin holds a PhD in biochemistry from Brandeis University and has a special interest in microbiome-based therapies, authoring two microbiome-focused forecast reports for DRG. She currently works as a member of the immune and inflammatory team, with a focus on respiratory diseases and pseudomonas aeruginosa (PsA). Prior to joining DRG, she contributed to a new company pitch at PureTech Ventures, now realized as Commense.