Crowdfunding In Life Sciences: A New Route To Finance 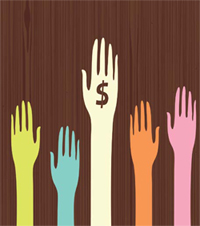 It’s currently hard to get funding, especially for those companies that are too small or too early stage to interest the large-scale investors. As Marc Lemonnier, CEO, ANTABIO (a French drug discovery company focusing on novel drugs to treat and prevent antibioticresistant bacterial infections) explains, at the early stage of development, venture capital companies can be reluctant to invest money, but as the research advances, the founders’ money may not be enough. So, the company is too young for venture funding, but too mature to be funded by founders, their friends, or families.

In donation-based crowdfunding, people may simply make donations, or they may get rewards or perks or have the opportunity to buy products preproduction. “Nonprofits and charities in the life sciences have a long history in crowdfunding in the form of large numbers of small donations, such as through sponsored events,” says Lee Barken, CPA, energy and cleantech practice leader at Haskell & White (business advisors for a range of companies including hi-tech; Barken speaks and writes on crowdfunding).

Accessing crowdfunding
Investors access crowdfunding opportunities through portals, where they can search for projects of interest, such as a specific disease, or in their local area and then invest online, even as little as a few dollars. Some portals operate on an “all-or-nothing” basis — the project must reach its funding goal, otherwise no funding is provided, and no fees are taken.

There are crowdfunding portals designed for the sciences, allowing people to donate money to companies and individuals in return for rewards or simply for the knowledge that they have supported research and development. Examples include MedStartr, which focuses on medical innovation; and Microryza, iAMscientist, Flintwave, Open Genius, SciFlies, and TechMoola, which all offer access to projects across the sciences.

Securities-based crowdfunding, whether lending money or buying equity, is a newer move for crowdfunding and is a more complex undertaking. In order to protect both companies and investors, regulations are necessary. There is a regulatory framework in place in Europe that allows securitiesbased crowdfunding, and according to Nesta (the United Kingdom innovation foundation), in 2011 companies and individuals raised €1.5 billion (approximately $1.9 billion) through crowdfunding for projects and businesses.

Examples of European equity-based platforms include:

Securities-based crowdfunding is not yet available in the United States. However, the JOBS (Jumpstart Our Business Startups) Act should ease some securities regulations, including allowing companies to source money from a wider pool of smaller investors, controlled by fewer restrictions. President Barack Obama signed the JOBS Act into law in April 2012, and the Securities and Exchange Commission (SEC) has about 270 days to create rules and guidelines. Both David Palella, founder of BioScience Ventures, a biopharmaceutical consulting firm, and Barken predict that the guidelines could be in place during 2013, but raise concerns that the SEC could make it very easy or very difficult for companies to use this funding route. “If the SEC guidelines are delayed, this could create obstacles for equity-based crowdfunding in the United States,” says Palella.

ANTABIO and WiSEED
ANTABIO has used crowdfunding to get a seed-round of financing through WiSEED, a crowdfunding platform based in France. WiSEED is dedicated to innovative and technology start-ups, and investors can invest directly online, with as little as €100 (approximately $130).

“At ANTABIO, we are a pure drug discovery company with no fee-forservice arm, so we rely on fundraising. We needed €300,000 (approximately $389,000) to validate our technology and molecules, to get enough data to attract a business angel. WiSEED’s innovative crowdfunding process allowed us to complete ANTABIO’s seed financing in a record time,” says Lemonnier. ANTABIO used the money to fund a proof-of-concept trial of its technology, and the data attracted a second investment from a business angel, which in turn led to an undisclosed drug discovery player acquiring the crowdfunding holding. This allowed WiSEED and the more than 200 small investors to exit with a profit. According to Nicolas Seres and Thierry Merquiol, founders of WiSEED, this is the first complete “virtuous circle” for crowdfunding applied to biotech start-ups.

Making the most of the opportunity
Raising money through crowdfunding is not quite the same as raising money through traditional routes — while you need to present a business case, members of the public will need different information and different levels of detail. “To make the most of a crowdfunding opportunity, you need to have an exciting technology, a solid business plan, and a good team. You also need to be able to communicate your science with a passion,” says Lemonnier. Palella adds, “I think crowdfunding could be most effective for those companies that have a human interest story, such as a drug for a childhood disease. The technology has to create a buzz, and the management team has to be good at marketing,” says Palella.

Companies seeking crowdfunding will also benefit from having a fan base — a group of “consumer cheerleaders” that will use their social media networks to spread the word. “People want a return on investment, obviously, but they also want to be part of something that is socially important, so the crowdfunding approach is best fitted to companies that are addressing major unmet needs,” says Lemonnier.

Surely, there’s a catch …
So, crowdfunding has potential to support the development of products for unmet needs, rescue companies that are falling into the funding gulf between founders’ money and VC, and provide the golden glow of a job well done and a return on investment for investors. It sounds like a win-win. However, is it all too good to be true? It is important to remember that securities-based crowdfunding is still a very new model, even in Europe where there’s a legal framework, and there is no legal basis for this as a fundraising route in the U.S.

“Using WiSEED was a novel idea and a very new concept, but the timing was right, and it met our needs,” says Lemonnier. “I don’t know whether I can generalize, but it certainly worked for us.”

Crowdfunding platforms are open to fraud, especially where patients, parents, and carers are involved and where projects are allied with a celebrity name (whether or not with the permission of the celebrity).”There is always the risk of ‘snake oil salesmen’ in open platforms like these,” says Barken. “Vulnerable people, such as those who have incurable diseases and are desperate for a cure, could be enticed to invest in dubious or ineffective treatments in return for an opportunity to get first access to a ‘treatment’.”

Other risks include companies that are well-intentioned but are incapable of coming up with the product, service, or rewards and scammers and opportunists who post up requests for funding but have no intention of completing the project. Crowdfunding in biopharma and the life sciences needs to develop safeguards as it expands and grows.

“There will always be risks in investing, even with high levels of regulation,” says Barken. “However, relying on social networks does build in some protection — defrauding your social network is high risk because it follows you.”

People can also reduce the risk of fraud by investing in individuals and organizations that they know and trust. Crowdfunding could be a huge opportunity for groups such as charities and universities to act as “curators” for research opportunities. There are other obstacles to crowdfunding beyond fraud, as Palella explains. “Biotech R&D tends to have a long timeline and requires large investments, so this would make attracting crowdfunding less likely. Crowdfunding also could run the risk of disenfranchising business angels who may believe that the process will bypass them.” For crowdfunding to work, turnaround does have to be fast, as Nicolas Seres, managing director of WiSEED, explains, “It is important to quickly reward small investors and keep them focused on this seed phase so that they can reinvest in another project, to reinitiate a novel entrepreneurial adventure.”

The future of funding?
Despite these concerns, there is a lot of enthusiasm about crowdfunding in the life sciences and biopharma. The UK BioIndustry Association (BIA) is calling for Citizens’ Innovation Funds, which would allow individuals to invest in innovative companies. These are based on the Fonds Communs de Placements dans l’Innovation (FCPI), which raised more than €6 billion (approximately $7.8 billion) between 1997 and 2011, investing in more than a thousand companies.

“I’m very excited about the future of crowdfunding — it could provide greater access to capital. The sweet spot will be for small companies, but there could also be potential for established companies that are looking for real-time market validation for consumer-facing products,” says Barken. “For companies, crowdfunding is a cheaper way to raise relatively small amounts of money, and it also provides an early validation of the marketplace. When raising funds from VCs, companies get the money to develop the products and then sell them, hoping that there is a market. Crowdfunding works the other way around — companies prove the market by effectively selling products in advance, and then develop them.”

Crowdfunding will only ever provide an additional pathway to funding, however, and won’t be a replacement for VC money. It could open up possibilities of hybrid funding models, such as Angelcrowds, which is currently in beta launch. This will provide a portal where investors and entrepreneurs can meet.