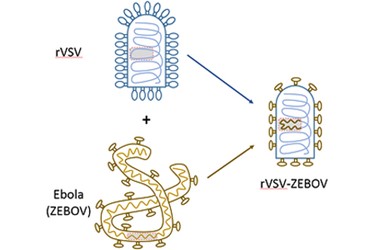 Prior to 2014 Ebola was mostly seen as a deadly disease but contained in remote areas of the world with a low likelihood of spreading. However, this false impression was dispelled when the disease hit heavily populated urban areas. Suddenly the world realized the Ebola outbreaks could reach epidemic proportions, and with an average fatality rate of approximately 50%, the potential impact could be catastrophic. In response, the scientific community rushed to develop a vaccine.

In May of 2017, the Democratic Republic of Congo (DRC) approved the use rVSV-ZEBOV to combat the disease, specifically for emergency vaccination. The vaccine is still considered experimental, but it has been shown to be 100% effective in a recent trial.  This was the latest of a series of trials with this vaccine. rVSV-ZEBOV has been shown to be immunogenic and has a strong safety profile. (Medaglini and Siegrist, 2017)

The trial was randomized and compared individuals who were identified to be at risk and were immediately vaccinated against those who were at risk but were given a delayed vaccination of 21 days or later. There were 4,160 people that were vaccinated. The group of individuals who received immediate vaccination had no cases of Ebola, while the delayed group had 16 cases. (Henao-Restrepo et al., 2017)

The vaccine is a live attenuated recombinant virus, which means scientists have made or found a strain of the virus that our bodies can easily fight off. Live attenuated viruses essentially give your body’s immune system a practice round. Your body gets to know what the virus looks like by fighting off a weakened version of the dangerous virus. Thus, when you actually get infected with the real virus, your body has antibodies and cells already prepared to fight off the virus quickly.

Recombinant viruses are created from two or more viruses which have had various parts combined to make a slightly modified virus. In the case of rVSV-ZEBOV, scientists created what is known as a “pseudovirus.” Roughly speaking, pseudoviruses use the genetic code of one virus to make all of the proteins for the inside of the recombinant virus and the genetic code from a different virus to make the proteins for the outside of the recombinant virus. The inside is often called the backbone or viral vector. (Medaglini and Siegrist, 2017)

In the case of rVSV-ZEBOV, recombinant Vesicular Stomatitis Virus (rVSV) is the inside vaccine vector. This vector is a common basis for pseudoviruses and it has been heavily studied for use as a vaccine vector (Geisbert and Feldmann, 2011). The outside of rVSV-ZEBOV is the Zaire strain of Ebola virus (ZEBOV). This is the part of the virus that an immune system can recognize, specifically to generate antibodies. This is a very powerful technique because it allows our body to make antibodies against the Ebola virus without ever coming in contact with the actual virus. The vaccine itself contains no live or dead Ebola virus, vastly improving its safety profile.

Now the biggest problem is that many of the places where Ebola can strike are very difficult to reach. Since the vaccine is a live attenuated virus that means that to be effective, the vaccine needs to be stored at -80°C until it is administered. Maintaining the cold chain is a challenge when handling biologics such as vaccines, particularly when the clinic is in a remote location.

Challenges involving securing the cold chain and the logistics plan needed to ensure the vaccine’s temperature is maintained can be difficult to overcome. To learn more about how we've developed a qualified cold chain solution to transport Ebola vaccines to Uganda, download our Case Study below. (link to case study to add to download library can be found below)