Do You Make This Critical Root Cause Analysis (RCA) Mistake? 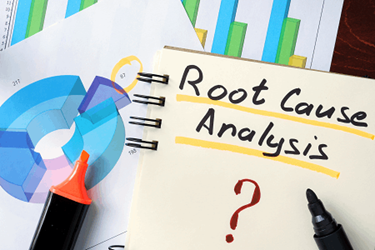 In FDA-regulated industries, root cause analysis (RCA) is perhaps the most frequently used tool for identifying the source of a good manufacturing practice (GMP) deviation and determining an appropriate corrective and preventive action (CAPA). Yet, inadequate RCA is also one of the most common citations found in observations issued by FDA and other international regulatory bodies.

Why do so many manufacturers use RCA ineffectively? In my experience, they go wrong in a couple of ways.

In some cases, they simply don’t put enough effort into performing an RCA. They stop at the easy or obvious answer — often operator error — and apply a correction to that rather than making an effort (or putting enough effort in) to identify the root cause. This can be due to rushing the process or not teaching people how to perform RCA.

In other cases, companies halt their RCA process at the direct cause, instead of continuing until they’ve identified the root cause. Worse, many don’t even realize they’re doing it. They think they’ve solved the issue when what they’ve really done is remove an indicator of an underlying issue — leaving the real problem to fester and recur at a later point.

For years, my go-to reference for RCA has been the Root Cause Analysis Guidance Document, published in 1992 by the Department of Energy (DoE). Now considered obsolete, the guidance is still, in my opinion, one of the best references available on the RCA process, providing many different elements that I’ve used over the years, including terminology.

The document describes a number of terms relating to causes of problem events, two of which are direct cause and root cause. Direct cause is defined as “the cause that directly resulted in the occurrence.” This would be like the person who follows a standard operating procedure (SOP) describing how to set up equipment, but misaligns a couple of parts during the setup, which causes the equipment to not function properly. So the person’s error is the direct cause of the problem that occurred.

Subsequently, the DoE guidance defines a root cause as “the cause that, if corrected, would prevent recurrence of this and similar occurrences.” The guidance provides further explanation as well: “The root cause does not apply to this occurrence only, but has generic implications to a broad group of possible occurrences, and it is the most fundamental aspect of the cause that can logically be corrected. There may be a series of causes that can be identified, one leading to another. This series should be pursued until the fundamental, correctable cause has been identified.”

Basically, this definition of root cause describes a chain of causes leading to the direct cause — so a series of underlying causes that allowed the problem to occur, with the root cause as the origin of the direct causes, along with other “contributing” causes.

Continuing our example from above, we know a human error (misaligning the equipment parts) caused the problem. If we investigate further, we discover that, while the procedure describes what to do, a specific technique is required to make the parts align correctly – and that isn’t something that was – or can be – documented in the SOP. Further investigation identifies that, during the training, the person was shown the technique but not given time to practice enough to become sufficiently familiar with it. Additionally, the training does not require the person to have the technique assessed prior to designating training on the task as complete. So, the root cause in this situation becomes an inadequately designed training program, versus the direct cause of a human error.

Consequences of Treating a Direct Cause as the Root Cause

When an organization confuses a direct cause for a root cause, several things can happen.

First and foremost, the root cause is not identified. This means CAPAs are prescribed for issues other than the root cause. While it’s beneficial and appropriate to correct the contributing causes to a problem, addressing only these will not solve the root cause — the underlying issue that led to the problem in the first place. The root cause of the problem remains untouched and will likely cause further problems in the future.

Learn more about identifying the real root cause in Joanna's webinar:

Root Cause Analysis & CAPA Identification: A Step-by-Step Guide for Manufacturers

Also, by only addressing the direct cause, the focus more often than not ends up on people rather than the process. Most all of our processes involve people, and when something goes wrong, there is usually a person at the point of the failure — but that doesn’t necessarily make the failure a human error. It means that the process or the system failed when the person tried to execute it. This is the point at which most companies stop and simply retrain the person using the same training program, looking no further into possible causes. This approach leads to a “blame culture” in many companies, rather than the culture of quality and continuous improvement of processes that we should be aiming for.

Additionally, by only addressing the direct cause, we remove an early warning indicator of the problem, which means the next time it occurs, we won’t be able to identify it as quickly. It may be more difficult to find and will likely have more significant consequences on the process or product.

If, on the other hand, we address and correct only the root cause, that then leaves the contributing causes (another term from the DoE guidance) — and their effects — untouched. And these contributing causes represent problems themselves, which should also be dealt with. Left unaddressed, they will allow the same problem, or similar/related problems, to happen again, even if the root cause is corrected.

To demonstrate this point, let’s revisit our example of the person who misassembled the equipment. Because of this issue, we now know that we have an individual performing the task incorrectly due to a root cause of an inadequate task training program. So we revise our training program – in which we now teach the technique, allow for practice, and incorporate a performance assessment that includes verifying that the person performs the technique correctly at the completion of training.

But if this is our only corrective action, we’ve only addressed future training — and new personnel completing the training – unless we specifically apply the corrective action to existing personnel who were trained prior to the revision of the training program. We know one person didn’t use the appropriate technique. But what about the other people who perform this task? If we don’t retrain the existing personnel using the revised program, we may later find that others never learned the appropriate technique, when they make the same error at some future point.

How to Identify the True Root Cause

To avoid a similar fate, it is critical to teach employees the difference between direct and root causes in training on the root cause analysis process, and how to identify which of the two they’ve found. And then, ensure that the root cause and all contributing causes are adequately addressed in the proposed CAPAs.

Another important step is to teach employees a technique that will help them drill down through those underlying causes. My personal favorite, and one of the strongest tools I’ve found, is a 5 Whys analysis. At first inspection, this process doesn’t look very robust, but in reality, the tool is very easy to use and is very effective at identifying the underlying causes that enabled a problem to occur.  And with a little practice, is very quick and easy for anyone to use.

Finally, management and employees must understand the importance of true root cause analysis, so sufficient time and resources are invested in the process.

With practice, it becomes fairly easy to get to the underlying root cause, which in vastly improves the investigation and CAPA process – which means problems will get fixed the first time, instead of recurring and having to be dealt with multiple times, which ultimately increases our cost of quality.

Joanna Gallant is an experienced, solutions-driven quality and training professional who has spent more than 23 years in pharmaceutical, biotechnology, tissue culture, and medical device development and manufacturing environments. Over her career, she has provided regulatory, technical, skill, and management development training support to all operations functions, as well as IT, R&D, customer service, and senior management. Now, as a training system consultant, she works with clients to design and deliver custom training and build/remediate training systems, including in support of regulatory audit observations and commitments.

Joanna has been a GMP TEA member since 2001, and now serves on the Board of Directors as an advisor. She is one of the founders of the Biomanufacturing Certificate Program at Worcester Polytechnic Institute, and became an Adjunct Professor at the Boston University School of Medicine’s Biotechnology degree program in 2011.

Joanna writes a popular article series for Pharmaceutical Online on the people side of pharma and GMP, provides monthly interactive web courses through the Life Science Training Institute, and authored GMP Training Can Be Fun! and offers an ever-expanding line of GMP training games and activities through her JGTA, LLC business.

You can contact Joanna at Joanna@JGTA.net or connect with her on LinkedIn.