Rapamune, which is indicated for use with corticosteroids and cyclosporin, was approved in 1999 as the first product of a new class of anti-rejection drugs. Rapamune inhibits activation of TOR (target of rapamycin), a key regulatory kinase involved in cell cycle progression.

Elan will receive royalty payments from AHP on sales of the new Rapamune product.

"This first approval for a formulation containing our NanoCrystal technology is a major achievement for Elan, and represents the validation of several years' of diligent scientific effort," said Larry Sternson, president of EPT. "More than 40% of potential drug products suffer from poor water solubility. This frequently results in potentially important products not reaching the market or achieving their full potential." 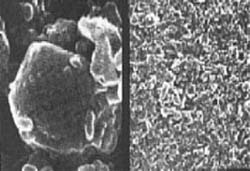 On the left, microcrystals of an oral therapeutic steroid magnified 25,000 times. The largest particle is about 50 micrometers across. On the right, a nanocrystal dispersion of the same drug. NanoCrystal particles are generally smaller than 1 micrometer in diameter.

Elan has several collaborations with major pharmaceutical corporations to develop other products and new formulations using NanoCrystal. "We believe that the application of our NanoCrystal technology will ensure the successful development of a large number of these potential pharmaceutical products," Sternson added.

Said Harold Marder, senior vice president of medical affairs at Wyeth-Ayerst Laboratories, "The availability of a tablet will be a major improvement for patients in terms of both convenience and ease of use. Unlike the oral solution, the tablets can be stored at room temperature."