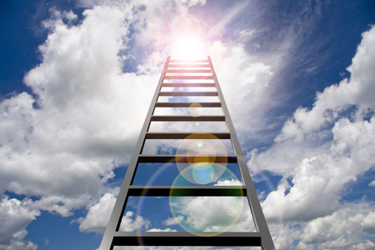 Vaporized hydrogen peroxide (vH2O2) is widely used as a surface decontamination tool in the pharmaceutical industry. Vaporized hydrogen peroxide is safe to use, has good material compatibility and low toxicity, and is active at ambient temperatures; it is scientifically proven to have broad, non-specific, and rapid microbial activity. Within the pharmaceutical industry, it is extensively used to support aseptic manufacturing and sterility testing environments as well as a tool for decontamination of cleanrooms.1 Standard procedures include the preparation of the location to be decontaminated prior to a decontamination cycle being performed. As with any GMP procedure, the process must be understood, verified, and validated.

Demonstration of efficacious decontamination is a critical aspect of aseptic processing and sterility testing. This process currently takes a large data set and the use of biological indicators (BIs). Enzyme indicators provide a mechanism to further understand the process and therefore enhance cycle robustness and sterility assurance. By adopting enzyme indicators in the cycle development phases, greater understanding of efficacy of the gassing process can be achieved by providing quantitative results in a faster time frame. This can lead to efficiency benefits through cycle design being performed with data driven decisions and by demonstrating a substantial margin quantitatively (rather than a simple pass/fail criteria).

The application of vH2O2 is widely adopted and recognized in the both the European2 and United States3 pharmacopoeias for sterilizing primary packaging, equipment, and some pharmaceuticals. Different gases may be used, including ethylene oxide, and the typical process involves exposure to the agent within a leak-proof chamber. In the case of production RABs (restrictive access barrier systems) and isolators, equipment to be sterilized is cleaned prior to the application of the gas cycle. It is essential to monitor any cycle for temperature, humidity, and gas concentration in routine use (as well as throughout cycle optimization and validation).

Cycle efficacy, in line with sterilization techniques, is an assessment of the lethality of the cycle; traditionally, biological indicators are used to demonstrate this. There is an expectation that they are placed at locations where decontamination conditions are most difficult to achieve.

Understanding decontamination and sterilization cycles is a responsibility that industry should take seriously. With the development of overkill cycles, establishing worst-case conditions can be challenging, with biological indicators providing a binary answer on cycle efficacy. Enzyme indicators can provide a quantifiable result, which enables safety margins to be built into cycle design based on data.

Learnings From Our Enzyme Indicator Study

A sterility testing isolator with well-established decontamination cycles was used to perform a study to assess the application of enzyme indicators to cycle optimization (see Figure 1). Vaporized hydrogen peroxide (vH2O2) is used to decontaminate surfaces within isolators prior to use. The validation and cycle development of vH2O2 bio-decontamination processes is routinely undertaken by using BIs consisting of Geobacillus stearothermophilus spores carried on a vehicle such as a stainless-steel disc. BIs can be deactivated/killed by vH2O2 if the decontamination cycle conditions are appropriate and repeatable deactivation of BIs under defined parameters allows a validated cycle to be determined. However, BIs have limitations in that they are prone to false positives, only give a qualitative positive or negative result, and they require seven days’ incubation to provide a result. Thermostable adenylate kinase (tAK) as an enzyme indicator (EI) takes an enzyme-based approach as a process indicator4 alternative to the bacterial spore-based BIs. The enzyme tAK has been shown to be inactivated by vH2O2, and a rapid 1-minute test has been developed using a luciferin-luciferase based assay for the immediate quantification of oxidized tAK values, determined by measuring ATP (adenosine triphosphate) produced by residual active tAK enzyme remaining after vH2O2 dosing. EI inactivation by vH2O2 is dose- and time-dependent, and when exposed to vH2O2 alongside BIs, the EI activity from RLU (relative light unit) obtained can be compared with the BI inactivation to establish a quantitative estimate of achieved log reduction (ALR) in RLU values rather than the qualitative growth/no growth outcome of a BI. 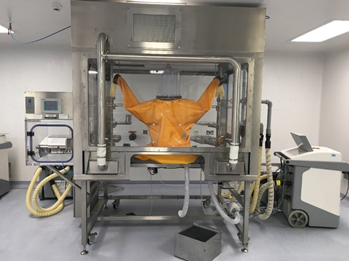 Learnings From Our Enzyme Indicator Vs. Biological Indicator Correlation Study

A correlation study was performed, with the aims of the study as follows

In the study, EIs were placed in triplicate alongside single BIs in 13 predetermined locations taken from the isolator’s annual gassing cycle revalidation protocol. Eight vH2O2 gassing cycles were performed, after which the EIs were analyzed using a luciferin-luciferase assay and the BIs incubated in tryptone soya broth (TSB) at 55°C to 65°C for seven days prior to recording if the TSB was turbid (indicating a positive result) or not.

During the gassing cycle it was noticed that there was a large amount of condensation on the isolator surfaces, which indicates too much vH2O2 is being used. It is not always the case that more vH2O2 produces a better “kill,” so the gassing cycle should be developed to only use as much vH2O2 as necessary, plus an added safety margin. However, it can take an extended period of time to optimize a gassing cycle using only BIs; therefore, cycles often use much greater amounts of vH2O2 than necessary in order to validate a repeatable cycle within a short time period.

Using EIs alongside BIs and analyzing the EIs immediately after the gassing cycles had completed meant data was instantly available regarding the “log reduction” and an accurate prediction of whether the BIs would be inactivated could be made. This allowed modifications to the length of gassing to be made prior to each gassing cycle, and within eight cycles, the amount of H2O2 used was able to be reduced by 39.5 g without adversely affecting the cycle efficacy. The gassing phase was reduced from 15 minutes to 10 minutes and the gassing dwell phase from 25 minutes to 1 minute. Due to the reduction in H2O2, the aeration time was also reduced by approximately 180 minutes. 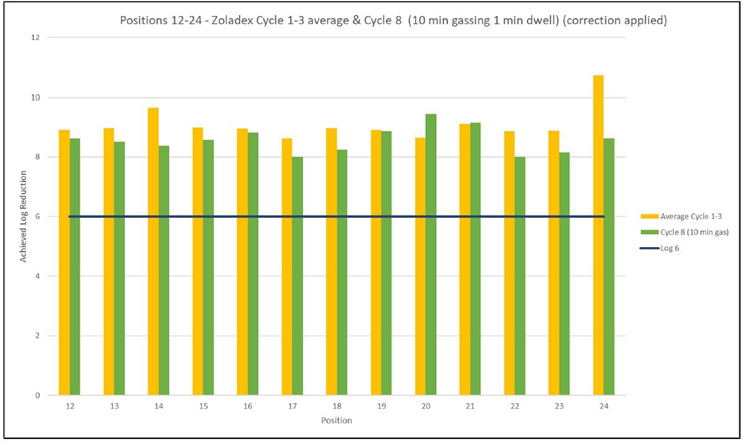 The gassing cycle was able to be effectively optimized and the aeration cycle length greatly reduced due to the quantitative data gained about the cycle from using enzyme indicators rather than only biological indicators. BIs were used alongside EIs to ensure cycle effectiveness was not compromised and still met regulatory expectations. EIs are an exciting tool that allows gassing cycle effectiveness to be accurately determined and could be used to ensure a satisfactory cycle has been completed prior to manufacturing taking place.

Stephen Dawson is an associate business analyst at AstraZeneca, working in the Development & QC Capability team and supporting IT projects for the Pharmaceutical Development group, including the implementation of a new Electronic Laboratory Notebook. Stephen previously worked in QC microbiology and pharmaceutical development for seven years, where he gained experience in sterility testing isolator cycle validation and microbiological testing method development. While there, he also provided input to drug project control strategies. He is currently studying for a business analysis qualification with the International Institute of Business Analysis (IIBA).

Miriam Guest is an associate principal microbiologist in Pharmaceutical Technology & Development, Operations, AstraZeneca, working in the New Modalities and Parenteral Development group, based at the company’s Macclesfield site in the U.K. She has worked in pharmaceutical development for more than 20 years, in both microbiology and formulation laboratories and GMP manufacturing environments. More recently, she has been supporting complex supply chains and designing robust control strategies, including the associated regulatory authoring and interactions. She leads the AZ Global Microbiology Forum, bringing together the global network of microbiology labs to drive standardization and quality principals in microbiology. Guest devised and leads AstraZeneca’s 21st Century Microbiology Strategy to innovate, industrialize, and implement technology solutions to drive efficiencies and process robustness benefits. One of her projects was awarded the AZ Global Operations Award for Performance in 2019. She is an active committee member of the Pharmaceutical Microbiology Interest Group (Pharmig) and is involved in the Modernisation of Microbiology Cross Industry Consortium (MMCC).