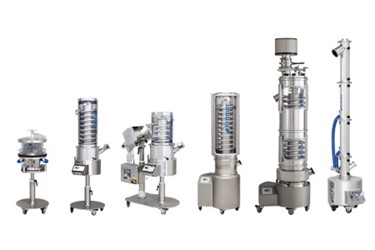 Kramer AG invented and launched the first ever vertical tablet deduster in 1975, the E79, to the world’s pharmaceutical industry to address dusty tablets that caused a great deal of production problems.

Kramer’s invention proved highly successful in dedusting and deburring efficiency making the Kramer name synonymous with tablet dedusters. The E79 can still be found in many tablet production suites which is a testament to the efficiency, quality, design and construction of Kramer products.

With this lowly beginning Kramer has become the worldwide market leader in tablet dedusting. Drawing upon 45 years of experience Kramer has continued to innovate, producing many more firsts. These include the invention of the first upward conveying deduster in 1992. The first deduster to use a counterweight system (patented), the first deduster to integrate a metal detector, and the first Wash in Place (WIP) deduster in 2000. The year 2008 saw the introduction of the first and only controller to use automatic resonance control. 2009 saw the establishment of Kraemer US to service and support the North American market. The first controller integrating all deduster and metal detector operations into a convenient, user friendly touch screen was launched in 2012. The most recent developments have been the new validated WIP machine which meets OEB5 requirements according to ISPE standards, and machines that are ATEX certified.

Kramer starts its 45th year with more product offerings than ever before, from the economical KD30 line, to our validated and tested to ISPE standards KD7070 WIP/CIP machines, and vertical capsule polishers.

All Kramer products are built to the highest quality for many years of operation with a low cost of ownership, and quick return on investment.

Since 1975 we have never strayed far from our roots, making it our mission to develop and improve our tablet dedusters and conveyors to ensure our product portfolio consists of products that are modern, economical, rugged, and easy-to-use needing no tools for cleaning disassembly.