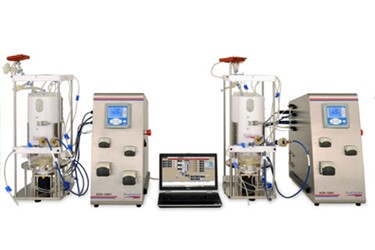 As gene transfer vehicles, lentiviruses exhibit many desirable properties, such as high transduction efficiencies, ability to infect both dividing and nondividing cells, and stable integration into the host cell genome. These properties make them well-suited for in vivo and ex vivo gene and cell therapies. However, cost-effective manufacturing of lentiviral vectors (LV) at commercial scales has proven difficult and remains a pressing issue for the marketing of therapies that depend on their application.

The most established approach for lentiviral vector production is transient expression of vector components in adherent HEK 293 (or derivative) cell lines by a three or four plasmid co-transfection. However, large-scale production is severely limited in adherent systems. Because of these limitations, commercial manufacturing of LV is moving to cells adapted to serum-free growth and suspension systems that are much more amenable to scale-up. Further, stable-inducible producer cell lines could eventually replace transient systems for LV production, because this approach circumvents the costs and supply chain limitations of high-quality or cGMP-grade plasmid DNA and transfection reagents, as well as the inherent variability of transfection efficiencies across production lots.