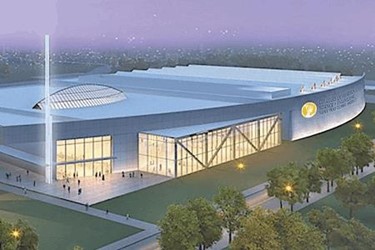 Athenex Inc. has hired a German firm to oversee the construction of its large pharmaceutical plant in Dunkirk.

M&W Group describes itself as a "global leader in the design, engineering and construction of high tech facilities and major complex projects," according to its website. It will be tasked with building a facility that is unique to Western New York.

The Athenex factory – supported by a $200 million grant from New York state – will be dedicated to manufacturing cancer therapies developed by Athenex and other companies. After all phases are completed, its overall size is expected to be around 320,000 square feet.

Athenex's deal with the state says the factory will create at least 900 jobs in the Dunkirk area (half of them directly employed by the company). Athenex has pledged to invest a minimum of $1.52B into the facility.

The company started in the University at Buffalo laboratory of professor David Hangauer in 2003 and grew in spurts over the next decade until it attracted the attention of overseas investors. It subsequently raised more than $200M in from private investors in Asia to support its global vision as a developer and manufacturer of cancer therapies, and went public on the NASDAQ stock exchange in June 2017. Shares are currently selling at $15.55 and the current value of its outstanding stock is $901M.

Athenex announced its deal with M&W in a filing last week, estimating the cost of its work between $205M and $210M, most of which will be supported by New York state.

Athenex said in its last conference call that it hopes to break ground on the factory by April 2018, and has also reported previously that work is expected to take place in two phases. The larger first phase will include the main 281,180-square-foot facility to include high-tech manufacturing space, warehousing and offices/labs, with an expected completion date of 2019. A second phase will involve a 39,000-square-foot expansion for manufacturing and offices/labs, with an estimated completion date of 2020.

Athenex's deal with New York state also included its "North American headquarters" in the Conventus building on the Buffalo Niagara Medical Campus, where the state spent $25M to support office space and a pilot factory. The company has said it is roughly doubling the size of its factory in Newstead to 40,000 square feet. It is also developing two manufacturing facilities in China.