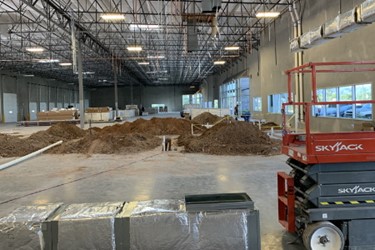 It’s a crisis most people and patients never know about, the shortage of some of the most common generic drugs. The numbers are scary, and surprising.

“Take the simple example of lidocaine which has been used consistently by hospitals for nearly 50 years,” said Medivant Health’s Head of Quality, Andrew Stasiak, CQA. “There are huge shortages of generic medicines like lidocaine because almost none of the other drug manufacturers will make it due to the small profit margin compared to other drugs which sell for much higher prices.”

Enter Medivant Health, which is currently building a 33,000-square-foot generic drug manufacturing facility in Chandler, Arizona. The first phase will create 10,000 square feet of manufacturing and lab space able to produce 40,000 vials of product each day. Considered a boutique Current Good Manufacturing Practice (CGMP) Manufacturer, Medivant is unique in that its sole purpose is to fill this generic drug shortage void. The facility is fully automated with minimal human intervention.

Larger drug manufacturers choose to produce drugs that generate greater income in order to maximize shareholder value and the company’s bottom line. Smaller and mid-sized drug manufacturers are turned off by low-profit margins, high barrier to entry, import and shipping costs, and scarce local production facilities across the U.S. That has left mostly small specialty pharmacies to compound the generic drugs despite only having the capacity to create small batches with little oversight and consistency, which also contributes to higher Health costs.

The timing of Medivant’s launch comes at the perfect time. In January 2020, new Good Manufacturing Practice (GMP) compliance standards will be enforced, and many compounding pharmacies are likely struggle to comply with the standards and the additional expenses, potentially making shortages even worse.

Medivant plans on producing more than 20 generic molecules which will be available for purchase by hospitals, surgical centers, emergency centers, and even some doctors’ offices. Group Purchasing Organizations (GPOs) which sell products in bulk to hospitals nationwide have already begin discussions with Medivant and are expressing excitement that the company will help fill a major need in the market.