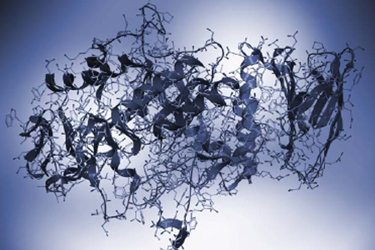 Lysozyme, also known as muramidase, is an enzyme found in human tears, saliva, human milk, and most white blood cells. Its function is to kill bacteria by damaging their cell walls through catalyzing hydrolysis. Discovered in 1922 by Alexander Fleming, lysozyme became known as the first antibiotic.

Static Light Scattering (SLS) is an optical technique that measures the time-averaged intensity of scattered light. It is a typical method for determining molecular mass, especially of macromolecules such as polymers and proteins. Moreover, SLS can also be used to determine the second virial coefficient, which reflects the interaction between particles and solvent. A positive gradient indicates that the particle–solvent interactions are stronger than the particle–particle interactions, and vice versa.

This application demonstrates how the molecular mass of lysozyme was determined by static light scattering measurement with the Litesizer™ 500, with excellent accuracy and repeatability.