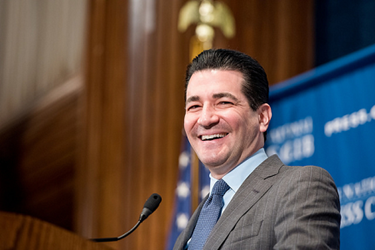 It was the announcement many have been dreading — but expecting — for several months now. Dr. Scott Gottlieb, 23rd Commissioner of the FDA, announced his decision to step down after 663 days (22 months) on the job. The news is sure to raise concerns for many, from investors to parents of teens tempted to vape. But I think the biggest surprise is how equally sad thought-leaders within the agency will be to say goodbye.

The truth is Gottlieb has been good for the FDA. He used his unique pedigree and résumé to efficiently accomplish objectives on multiple fronts. He has been a CEO, an investor, and a policy maker-whisperer, calming fears about an agency that can be seen as conservative and a stickler on the science at times. He was unusually effective as a commissioner, and hopefully future commissioners will learn from some of his best practices.

He started off on third base:

But according to those inside the FDA, his true “special sauce” was his ability to master issues quickly, “get it,” and approve recommendations for what needed to be done — and then, most importantly, offer effective support to make changes.

A Master Communicator And Strong Leader

He was a commissioner who did not need multiple briefings to understand complex policy changes; often a decision could be made during a quick hallway conversation.

His ability to operate in Washington, D.C. and leverage unconventional connections — which ranged from the White House, the Office of Management and Budget, members of Congress from both sides of the aisle, Congressional staff, think tanks, and advocacy groups — enabled FDA centers to gain support, launch collaborations, and clear hurdles to get things done quickly. Based on his previous experience both inside and outside the FDA with drugs, biologics, devices, combination products, and more, Gottlieb had the capacity to understand and support policy ideas and solutions through each center’s particular lens.

He and his team were masters at communication. For those who tracked his public speaking engagements, you likely noticed Gottlieb used each speaking engagement to announce new or repackaged information; he never used the same old stump speech over and over again. He used each public engagement to tailor an announcement to re-emphasize priorities, and he always had a news hook hinting at what was coming next.

He also utilized written action plans on a broad array of topics to set external expectations around the FDA’s policy agendas and timelines. Because Gottlieb included new information in well-packaged action plans, he was able to keep the press, legislators, and stakeholders interested in his every word or tweet.

I smiled at the irony that on the biggest announcement of his FDA career, he was not the speaker, writer, blogger or tweeter; rather, he allowed a newspaper (The Washington Post) to carry the news.

The agency benefited from his ability to articulate a vision and present a clear request for resources for issues that appealed to both Congress and the FDA: it encouraged members to invest in the agency’s appropriations. As one of the founders of the Alliance for a Stronger FDA, a group that focuses on lobbying for FDA appropriations, I can say with certainty that this is a very important skillset for a successful commissioner.

He encouraged center directors to be creative and use new twists to solve old problems. For example, six months into his tenure, in November 2017, he and Center for Drug Evaluation and Research (CDER) Director Dr. Janet Woodcock announced CDER would move to a more concise guidance format that at times would utilize — of all things — bullet points. The Center for Biologics Evaluation and Research (CBER) then was able to benefit from that streamlined thinking and allowed to promulgate needed guidance at a quicker pace. And although the Center for Devices and Radiological Health (CDRH) had already ratcheted up its release of guidances over the previous few years, having the commissioner’s support to advance new initiatives and guidances helped to speed the approval and adoption of new policies within this center.

He led the agency with the energy of someone who knew his time in the big chair was limited and with the belief he could change the path of a large bureaucracy.

Last, but not least, Gottlieb understood the value of a “thank you” at many levels. Before, during and after the recent government shutdown, he voiced appreciation for the staff working at the agency and genuinely seemed to be part of the FDA team.

How Will His Departure Impact The FDA?

With all the accolades and goodbyes delivered via Twitter, now everyone wants to know what impact his leaving will have on the agency. What initiatives will drop off the FDA’s very full policy plate? Where will momentum be lost? What will be the impact on patients and consumers waiting for novel treatments, cheaper biosimilars, non-tainted foods, and e-delivery devices? Who will be the acting commissioner, and is there time to get someone new confirmed before the 2020 elections?

Though the answers to these questions will unfold slowly, the key will be who the administration appoints as acting commissioner and, down the line, who is nominated and confirmed as commissioner and how that person approaches the job. Will the acting be a more of an administrator or someone with a focused interest?

Assuming the acting commissioner will be more of a caretaker for the first few months, we have to remind ourselves the FDA is a bureaucracy: once the direction is set, change occurs gradually. At this point, I doubt the direction of the agency will substantively change, but without Gottlieb and the grease he provided to get the wheels turning, we will see some changes immediately. The first thing we will likely see is the communications office may get a moment to exhale; FDA watchers should expect the frequency and boldness of announcements from the commissioner’s office to slow. I don’t think the Energizer Bunny is a viable candidate (and I doubt he is an MD), so it is hard to imagine an acting commissioner candidate could continue the pace Gottlieb and his leadership team set.

Then, depending on the choice of acting commissioner — though much of this year’s agenda is set — the person may not choose to take the same political risks as Gottlieb, thus impacting the progress of some of the FDA’s current initiatives. For example, Gottlieb was willing to take a political risk to identify the crisis of teen use of vaping/JUULing products. There also are some food jurisdictional issues the next FDA commissioner may not pursue. The next commissioner may not have the same scientific view and may allow politics to impact the speed and thoroughness of reviews of new technology, like cell-based therapies. Other areas where observers may look to determine what may drop off FDA’s plate include: agenda items he moved that were at odds with the administration; those that were controversial inside the  FDA or efforts where he went out on a limb pushing the bounds of the FDA’s authority, especially perhaps legally; and, lastly, efforts that were planned to be implemented far in the future and were not required by a user fee agreement or by Congress.

All in all, Gottlieb will be seen as a strong FDA commissioner.

However, despite the market’s reaction, before you panic, let me leave you with a final thought as you decide the likely impact of Gottlieb’s departure. Clearly, the administration’s choice of commissioner will be very important and no one will approach this job with the same qualifications and skillsets as Gottlieb, but realize many of the innovative ideas and agenda items the FDA has been advancing during his tenure were thanks to people who will remain at the agency. Many of the generators and stewards of forward-thinking, leapfrogging initiatives, like CDRH Director Dr. Jeff Shuren, CBER Director Dr. Peter Marks, Woodcock, Oncology Center of Excellence Director Dr. Rick Pazdur, Center for Food Safety and Applied Nutrition Director Dr. Susan Mayne, and many others who helped identify and shape the agency’s bold direction with Gottlieb’s support.

In my humble opinion, the next person to sit in the commissioner’s office would do well to learn from Gottlieb’s play book. Those in his inner circle have likely all become more effective for having worked with Gottlieb. The bar has been raised.

Nancy Bradish Myers, JD, president of Catalyst Healthcare Consulting, Inc., is a Washington, D.C.-based attorney with deep expertise in healthcare law and regulation, policy development, patient engagement, and government relations. She served as senior policy counsel in the Office of the FDA Commissioner, as well as special assistant/senior strategic advisor to the FDA acting deputy commissioner for operations. Myers has been closely involved in drug, biotechnology, and medtech regulatory issues for over 25 years. She currently advises clients on regulatory and health policy matters. You can reach her at nancy@catalysthcc.com or connect with her on LinkedIn.