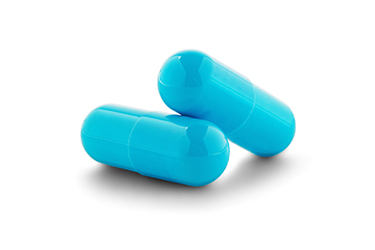 Capsule shell chemistries today must meet a myriad of requirements, including those affected by consumer preferences, the need for compatibility with active pharmaceutical ingredients, a formulation's dissolution rates and moisture sensitivity, the acceptable oxygen permeability, and the overall product stability.

The most common are hard gelatin capsules, typically made of collagen material of animal origin. Vegetarian options include capsules made of hydroxypropyl methylcellulose (HPMC), potato starch, and pullulan (tapioca). Secondary gelling agents, such as carrageenan, gellan gum, pectin, agar, and xanthan gum, may also be present. Capsule suppliers also make capsules from polyvinyl acetate (PVAc) for filling with water-insoluble drugs that have been dissolved in solvents such as polyethylene glycol (PEG).

Capsule shells are classified as hard or softgel, with the latter being plasticized by the addition of glycerin, sorbitol, or a similar polyol. Pharmaceutical manufacturers may fill capsules with powders, granules, pellets, liquids, gels, pastes, or smaller capsules. With the right chemical and physical properties, shells can accommodate a combination of incompatible ingredients in a single capsule.

Given the different raw materials and application requirements at play, you can simplify mixer selection for a particular capsule-shell formulation by considering the formulation's viscosity and the appropriate level of shear. The viscosity profile during mixing is a function of the formulation itself, but other factors also influence it, such as the order of adding ingredients, the processing temperature, and the shear input. For the most part, the affinity of the dry components to the liquid vehicle how easily the powders disperse or dissolve dictates the suitable mixing action and intensity.