Trump's Deregulatory Agenda: What It Could Mean For Biopharma & Medtech Companies 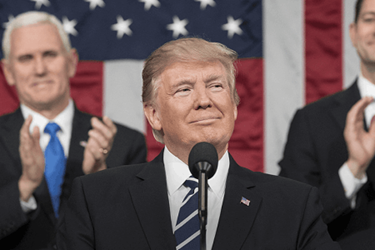 President Trump promised to take action to streamline the federal government. Within just a few days of taking office, he launched his deregulatory agenda, and he has now issued several executive orders that build on each other. How the concept will be implemented and by whom will continue to evolve with the addition of key staff.

In this article, we analyze the executive orders and the Office of Management and Budget’s (OMB) implementation guidance to agencies and offer our perspective on their implications for the FDA and innovators.

As we explore later in the article, this initiative not only offers opportunities for companies, trade associations, and patient groups to identify regulations to be withdrawn, but it may well offer chances to share cost estimates with the FDA and the administration in order to advance policy priorities. It could potentially open up a whole new area in which policy disputes may play out over cost estimates of specific provisions of FDA regulations and guidances.

Although this is not the first time a new administration has focused on trying to eliminate regulatory deadwood, we believe this time it may have important implications for biopharma and medtech companies and their regulatory strategies. Past presidents have undertaken initiatives to try to reduce the size and reach of the federal government, including, for example, the Reinventing Government initiative under President Clinton, and President Reagan’s Grace Commission. But this may be the first time that a president has gone beyond improving efficiency and lowering costs by focusing on repealing two existing regulations that are determined to be unnecessary, cumbersome, and/or too costly as a prerequisite to issuing one new regulation.

On Jan. 30, the president issued what is now known as the “2-for-1” (or 2:1) order, directing federal agencies that promulgate any new regulation to offset the cost by rescinding two existing regulations. Then as a follow up, on Feb. 24, he issued the Task Force order, directing each federal agency to establish a task force charged with a range of deregulatory responsibilities.

How Will This Work?

Under the 2:1 order, the cost of any significant new regulation (or guidance) must be offset by rescinding two of equal cost. This “regulatory cap” applies to the current FY 2017. Specifically:

As required by the order, on Feb. 2, OMB took a first step and issued an initial “interim guidance” on this section of the 2:1 order.  OMB also issued a subsequent guidance providing further clarification, in Q&A form, on April 5.

Among other things, the interim and subsequent guidance provide key parameters for the methods agencies should use to estimate costs of regulations, for example:

In subsequent years, beginning in FY 2018, agencies must draft an annual regulatory cost submission to OMB, identifying any proposed new significant regulatory actions, and the proposed offsets. OMB must also provide guidance on this section.

Of note, under OMB’s most recent guidance, “agency” is defined as the cabinet department-level entity (HHS); however, we believe the practical implementation of 2:1 could potentially be carried out at the FDA level. This definition is one of the elements of 2:1 that will be further clarified as implementation gets underway.

How Are The 2:1 And Task Force Orders Related?

Here is what the Task Force order requires:

With the appointment of the RRO, who will be heading up the task force at each agency, Trump is creating a tangible, high-profile means of spotlighting and putting pressure on each agency to deliver results under the deregulatory effort.

It’s also worth noting that along with the 2:1 and Task Force orders, the president has issued a number of other actions that support his federal deregulatory and streamlining priorities.

For the FDA, which relies on issuing new guidance and regulations, implementing the 2:1 and Task Force orders may be a significant challenge that could tax the already drawn out process.  Notably, the FDA issued 27 significant proposed or final regulations in 2016 and 25 in 2015.

Though the FDA has more economists on staff than many other agencies, the requirement that agencies cannot use previously estimated costs from an original RIA in determining cost savings generated by an eliminated regulatory action will require a new calculation of “the opportunity cost to society.”

Implementing this will likely take significant time and manpower to identify regulations to be rescinded and to create a consistent approach to costing out both proposed and existing regulations to ensure stakeholder buy-in, while adhering to OMB’s parameters for estimating costs.

Though they’re starting to consider how to implement the new administration’s orders, agencies continue to seek further guidance from OMB on a number of issues under both the 2:1 and Task Force orders. There are nuances in both orders, and a lot will be determined by how OMB and agency leadership, such as a confirmed FDA commissioner, interpret some of these requirements.

It remains up in the air as to how the administration will ask the FDA to factor these deregulatory efforts into implementation of two key pieces of legislation that will both require issuance of a broad range of new guidance and regulations: the 21st Century Cures Act and the User Fee Act legislation that will be considered this year.

FDA must now take steps to: 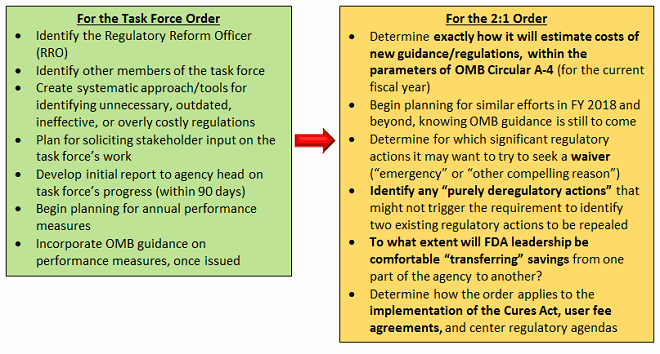 Clearly, the concept of repealing unnecessary and costly regulation is of keen interest to industry, especially FDA-regulated industry.  However, it is also clear that as far as how and to what extent regulations will be repealed, the devil will be in the details.

We are told that medical product groups like PhRMA, AdvaMed, BIO, and others have reached out to their memberships requesting ideas as to which regulations would be attractive candidates for repeal.  Many are in the process of cataloguing the repeal ideas and are awaiting news of a formal submission process.

One key issue we see for those hoping to implement new regulations — and thus propose the repeal of others — is that it’s not clear whether there is a “right” way to calculate costs. Although the FDA has its own economists who currently conduct these types of reviews, the way in which the new standards are interpreted may lead to differing opinions as to how to implement them.

OMB guidance notwithstanding, there is plenty of room for differing opinions and approaches to calculating costs of specific regulations. And many issues could arise during FDA review of new and existing regulations.

Despite the ambiguity that remains for now, we see this shift in White House policy as an opportunity. Strategic companies, trade associations, and patient groups may seek ways to craft credible cost estimates to share with the FDA and the administration to move policy priorities forward, whether they are withdrawals or advancement of significant regulations.

Although the FDA has an internal staff of expert economists who will be tasked with estimating costs of regulations under these orders, we anticipate that it will still be a significant undertaking for the agency to rescore targeted old regulations in part or in total, as well as to score new initiatives.

There will be a need for additional input, and there will likely be opportunities for companies that come to the agency with well-thought-out ideas that help to inform FDA’s thinking.

Looking ahead, this deregulatory initiative may open up a whole new area in which policy disputes can play out over the cost of implementation or withdrawal of specific FDA regulations and guidances. In cases where an FDA decision is controversial, if the scoring is not perfectly clear, there will be an opening for stakeholders to ask questions.

The bottom line is that with new initiatives come new opportunities and challenges.  Companies may want to anticipate potential moves by other stakeholders who could use this effort to either advance their own cause or hinder others.

Executive Orders Per Year in Office, By President 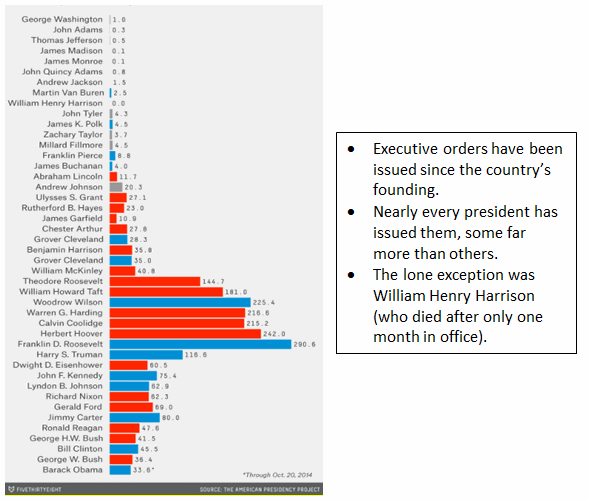 Nancy Bradish Myers, JD,  president of Catalyst Healthcare Consulting, Inc., is a Washington, D.C.-based attorney with deep expertise in healthcare law and regulation, policy development, patient engagement,  and government relations. Ms. Myers served as senior policy counsel in the Office of the FDA Commissioner, as well as special assistant/senior strategic advisor to the FDA acting deputy commissioner for operations. She has been closely involved in drug, biotechnology, and medtech regulatory issues for over 25 years. She currently advises  clients on regulatory and health policy matters. You can reach Ms. Myers at nancy@catalysthcc.com, or connect with her on LinkedIn.

Anne Petruska McNickle, vice president of communications and research at Catalyst Healthcare Consulting, Inc., specializes in regulatory strategy, health policy analysis, and communications. She held strategic communications and reimbursement roles at Amgen, and has worked in and around the industry for nearly 25 years. She began her career in healthcare journalism, at The Pink Sheet. You can reach her at annemcnickle@catalysthcc.com, or connect with her on LinkedIn.