Understanding 2019 FDA Enforcement Trends — And What They Mean For 2020 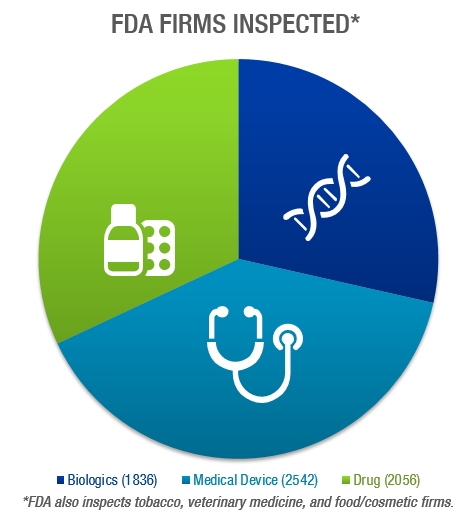 As has been the case in previous years, the majority of inspections resulted in a classification of No Action Indicated (NAI). 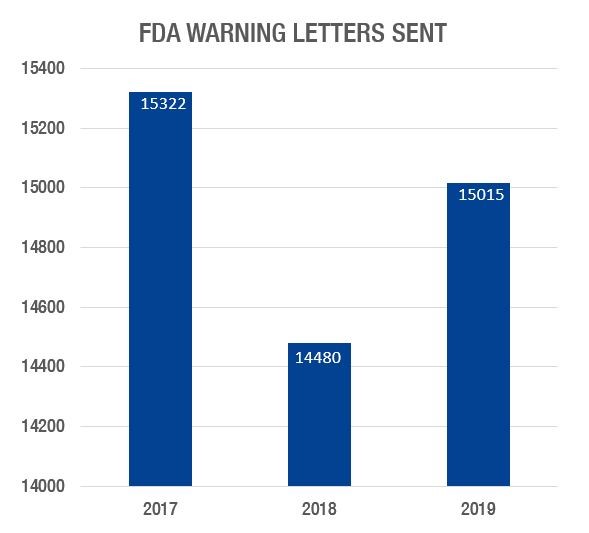 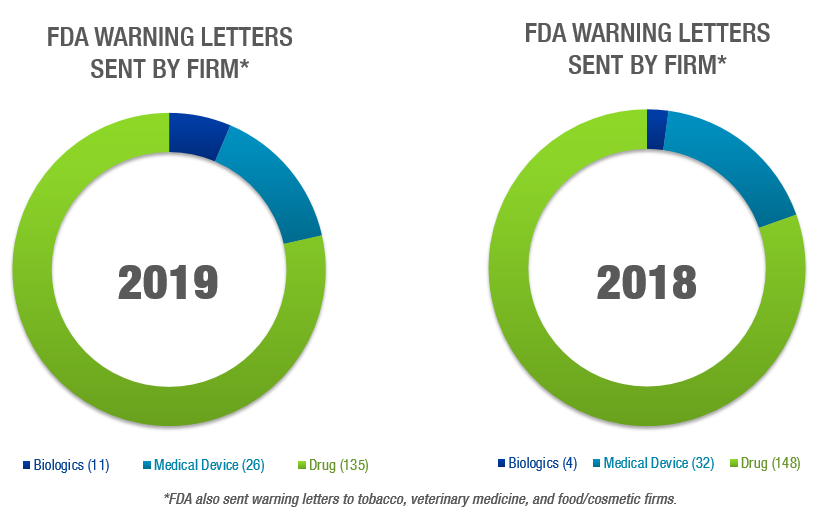 An analysis of FDA Form 483s provided to drug manufacturers in FY 2019 shows that manufacturers continue to struggle with the same themes. Section 211.22(d) of the regulations governing pharmaceutical manufacturing practices, “Procedures applicable to the quality unit shall be in writing and shall be followed,” was the most frequently cited regulation in Form 483s sent to drug manufacturers in FY 2019; it was the second most frequently cited regulation in FY 2018. The frequency of the appearance of this citation may be explained by the FDA’s focus on over-the-counter manufacturers, which often lack formalized quality units.

As we head into the last year of the FDA’s three-year period of enforcement discretion toward certain regenerative medicine products, which ends in November 2020, it is important to look back at the FDA’s related activities in 2019. On Jan. 15, 2019, then-Commissioner Scott Gottlieb reinforced the agency’s focus on stem cell and gene therapies in a statement that noted that the FDA anticipates that by 2020, it will receive more than 200 investigational new drug applications per year, building on the more than 800 active investigational new drug applications already on file with the agency. On April 3, 2019, Gottlieb released another statement, this one focused on firms illegally manufacturing, selling, and promoting stem cell therapy products. In his statement, Gottlieb noted that as the agency comes to the end of the period of enforcement discretion, it may make steps to provide a development path for promising products developed under the appropriate regulatory process but step up enforcement against sponsors of higher-risk products that are not engaging in the regulatory process. The same day, FDA issued 21 enforcement letters to manufacturers and healthcare providers offering unapproved stem cell products. As we approach November 2020, we expect to see this enforcement trend continue.

On Feb. 11, 2019, Gottlieb released “a plan for policy advancements with the goal of implementing one of the most significant modernizations of dietary supplement regulation and oversight in more than 25 years.” Gottlieb noted that while scientific advancement has led to new opportunities for consumers to improve their health, there has also been an increase in the number of adulterated and misbranded products. On the same day, the FDA issued 12 warning letters and five online advisory letters to companies that were illegally marketing unapproved drugs claiming to prevent, treat, or cure Alzheimer’s disease and other serious health conditions. In his statement, Gottlieb also highlighted actions taken against dietary supplement manufacturers claiming to prevent, treat, or cure other serious conditions such as cancer and opioid addiction. One month later, the FDA issued a warning letter to Nutra Pharma Corp., noting its distribution of new unapproved drugs claiming to provide treatment of cancer, arthritis, and opioid addiction.

On May 16, 2019, Steven Tave, director of the FDA’s Office of Dietary Supplement Programs, highlighted significant noncompliance by the supplement industry with the FDA’s requirement for premarket notification for new dietary ingredients (NDIs), estimating that the number of premarket notifications for supplements containing new dietary ingredients submitted is less than 25 percent of where the agency expects it should be. It appears as though the FDA will continue more aggressively enforcing the NDI notification requirement in 2020.

The FDA published press releases about six consent decrees in 2019. Throughout the year, the FDA made clear that it intended to focus enforcement on compounding facilities. Days before he stepped down, Gottlieb released a statement on new efforts to improve the quality of compounded drugs, in which he shared the FDA’s 2019 compounding priorities. He noted that the agency would focus on compliance with good manufacturing practice requirements by outsourcing facilities, helping compounders identify insanitary conditions, and performing risk-based inspection and other enforcement efforts to identify compounders producing drugs under substandard conditions. This proved true, as four of the six consent decrees in 2019 were entered against compounding facilities.

On Feb. 6, 2019, the U.S. District Court for the Western District of Pennsylvania entered a consent decree between the United States and Ranier’s Rx Laboratory Inc. and owner Francis H. Ranier for manufacturing purportedly sterile drug products in insanitary conditions. When announcing the consent decree, Gottlieb stated, “We continue to see concerning activity when it comes to some compounded drugs, including problems related to the conditions under which compounded sterile medicines are made, which can raise significant risks to patients. This is an area of intense focus for FDA.”

Similarly, on March 12, 2019, the U.S. District Court for the Northern District of Texas entered a consent decree against Guardian Pharmacy Services and owner Jack Munn for purportedly manufacturing under insanitary conditions and using labels that were false/misleading and that did not include adequate directions for patient use. When announcing the consent decree, Gottlieb again confirmed the FDA’s enforcement focus on compounding facilities, noting that while compounded drugs serve an important role for patients, the drugs also pose significant risks because they are not FDA approved and are not reviewed by the FDA for safety, effectiveness, or quality.

On May 22, 2019, the U.S. District Court for the Southern District of Texas entered a consent decree against Pharm D Solutions, LLC, and owners Luis R. De Leon and Juan C. De Leon for allegedly manufacturing and distributing drugs under insanitary conditions that had strengths different from what they were represented to possess and did not include adequate directions for use. The announcement of the consent decree signaled the FDA’s enforcement focus with Acting Commissioner Sharpless noting, “We’ll continue taking enforcement actions, like the one we’re taking today, to ensure that these companies and products do not put patient health at risk.”

Also on May 22, 2019, the U.S. District Court for the Northern District of Illinois entered a consent decree against PharMedium Services and president and vice president Scott Aladeen and Warren Horton for violations at multiple facilities, including manufacturing drugs under insanitary conditions and failing to include adequate directions for use.

The other two consent decrees were entered on July 18, 2019 and Sept. 3, 2019, respectively, against an Arkansas food and medical product grocery warehouse, J and L Grocery, LLC, for insanitary conditions, and Tennessee drug, dietary supplement, and device distributors Basic Reset and Biogenyx, for distributing unapproved drugs and devices, failing to comply with current good manufacturing practices (cGMPs) for dietary supplements, and distributing dietary supplements with incomplete labeling.

In 2019, the Department of Justice (DOJ) increased its enforcement on opioid manufacturers, distributors, and pharmacies. On Feb. 8, 2019, DOJ announced the issuance of a temporary restraining order to stop two Tennessee pharmacies, their owner, and three pharmacists from dispensing controlled substance medications, including opioids. The complaint alleges that the pharmacies and pharmacists were dispensing and billing Medicare for prescriptions in violation of the Controlled Substances Act and False Claims Act, and that the unlawful dispensing of opioids was tied to the deaths of at least two people and numerous other serious overdoses.

On April 9, 2019, a grand jury in Virginia indicted Indivior Inc. (formerly known as Reckitt Benckiser Pharmaceuticals Inc.) for engaging in an illicit nationwide scheme to increase prescriptions of an opioid drug used in the treatment of opioid addiction. The indictment alleges that Indivior promoted its drug without regard for safety concerns and risk of abuse. Principal Deputy Associate Attorney General Jesse Panuccio noted that “The Department of Justice intends to hold accountable those who are in a position to know the harm opioid abuse inflicts, but instead choose to profit illegally from the pain of others. Manufacturers, distributors, pharmacies, and doctors should all be on notice that they must follow the law and act responsibly.” On July 11, 2019, Reckitt Benckiser Group agreed to pay $1.4 billion to resolve these claims.

Overall, 2019 was a year of continuing trends at the FDA, with a few new areas of focus dispersed throughout the year. We expect to see continued efforts in the enforcement areas discussed above, particularly in the areas of dietary supplements and opioids, under the new leadership of Commissioner Stephen Hahn. We also anticipate significant policy discussions to come up during the ongoing presidential campaign. We look forward to seeing what other new trends develop in 2020.

Bethany Hills is a partner in the Life Sciences Group at Morrison & Foerster LLP, a global law firm, and has a full-service Food and Drug Administration (FDA) regulatory and compliance practice. Her FDA practice spans the complete product life cycle, from pre-market product development and market authorization processes to post-market compliance issues, such as labeling, promotion, and enforcement actions. Hills provides clients with advice on everything from FDA submissions and communications strategies to post-approval compliance and reimbursement issues. She advises medical device, drug, combination product, diagnostic, biologic, and regenerative medicine, cosmetic, dietary supplement, and food industry companies, and the investor groups focusing on these industries.