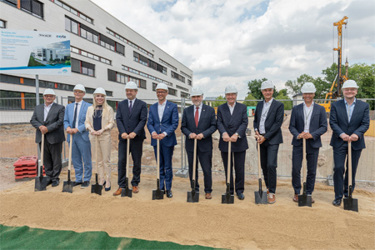 The excavators are set to roll onto the WACKER site in Halle. As announced by the company today, the development of the Biotech site into an mRNA competence center has already begun. In the future, actives based on messenger ribonucleic acid (mRNA), such as mRNA coronavirus vaccines, will be manufactured here. The production capacity in Halle will be more than tripled as part of the expansion, with the number of employees more than doubling. WACKER is investing more than €100 million in the expansion of the Halle site.

The start of the Weinberg campus expansion was marked with a symbolic groundbreaking ceremony. WACKER’s site in Halle will be expanded in the coming months into a competence center for actives based on messenger ribonucleic acid (mRNA). Four new production lines are to be built, which, among other things, will produce mRNA vaccines for customers. As already announced by WACKER in April, part of the new capacity will be available to the German federal government as and when required as part of its pandemic preparedness contracts.

“We are happy that our expertise in making mRNA vaccines will contribute to the fight against future pandemics. The expansion of our Halle site will create capacity to prepare for pandemics and beyond,” said WACKER CEO Christian Hartel. Saxony-Anhalt’s Minister for Economic Affairs Sven Schulze, and Prof. Armin Willingmann, Saxony-Anhalt’s Minister for Science, Energy, Climate Protection and Environment, were also present at the official start of construction.

“With this expansion into a competence center for mRNA actives, WACKER is bringing a technology of the future to Halle,” added Melanie Käsmarker, managing director of Wacker Biotech GmbH in Halle. “mRNA actives are not only used as vaccines, for example to protect against coronavirus, but the mRNA technology also allows completely new treatment options, such as in cancer therapy. We see a lot of potential here and going forward want to serve the increasing demand for mRNA actives from Halle,” she said.

The expansion will more than triple WACKER’s production capacity at the Halle site. There are plans for a new building with four floors, which is to be connected to the existing building. Alongside the four mRNA production lines, the new building will contain storage areas and quality control laboratories, as well as office space and recreation rooms. WACKER intends to hire around 200 new employees as part of the expansion. Recruitments are being sought in all departments, particularly laboratory assistants and pharmaceutical technicians, as well as employees in production, supply chain management and quality control, who will be trained in the coming months to be ready for the start of production in 2024.

The new building is planned to be ready and the production lines operational in less than 24 months. The high-tech plant constructor Exyte has been hired as general contractor for the construction and validation of the new facilities. Exyte specializes in the delivery of semiconductor and pharma plants and is considered a pioneer in cleanroom technology. “Biotechnology is a strategic growth area for Exyte. We want to continue to expand our market position with, for example, our engineering expertise and innovative solutions. We are pleased to support WACKER as general contractor in the construction and validation of the new facilities,” said Exyte CEO Dr. Wolfgang Büchele. “The manufacture of pharmaceutical actives is subject to the highest standards. As such, the requirements for plant construction are just as high,” said Wacker Biotech Managing Director Käsmarker. “In Exyte, we have the perfect partner for this project.”

During a Capital Market Day at the end of March, WACKER announced that it would significantly increase its investments in the further growth of its biotechnology business. WACKER wants to invest more than €80 million per year in this area in the next few years. By 2030, WACKER BIOSOLUTIONS plans to contribute around €1 billion to Group sales. The development of the Halle site into a competence center for mRNA will aid this strategy.