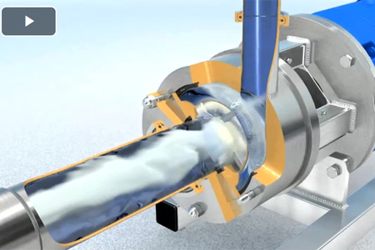 When blending easily miscible liquids of similar viscosities, an agitator will produce satisfactory results. But where there is a significant difference in viscosity between the two liquids, an agitator tends to move the two liquids around without actually blending them together, and it can take a long time to achieve a uniform blend.

With a Silverson high shear mixer, the positive mixing action of the rotor/stator assembly draws the liquids into the workhead where they are rapidly combined before being forced out through the stator and projected back into the vessel; the liquids are blended almost instantaneously.

With some applications, such as continuous dilutions or when the materials react on contact, a Silverson In-Line mixer is most suitable. Typically the secondary liquid would be introduced into the pipeline just upstream of the In-Line mixer so that the liquid streams are subjected to intense high shear on contact, resulting in a homogeneous blend in a single pass.