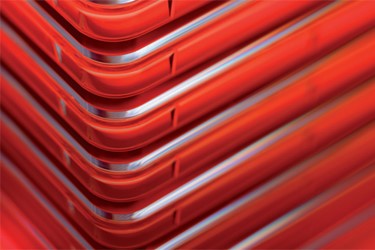 Abstract
Thermo Scientific™ Nunc™ Cell Factory™ systems are an effective format for the easy and rapid expansion of human mesenchymal stem cells (hMSCs). The Thermo Scientific™ Nunclon™ Delta surface is a fully synthetic chemical surface available with many options for size, shape, and surface area. hMSCs were removed from liquid nitrogen and plated directly onto the surfaces to be evaluated. T-25 cell culture flasks were used to determine the optimal seeding density prior to expansion of hMSCs on larger formats. For expansion, a Nunc Cell Factory 1-layer system, also with the Nunclon Delta surface, was seeded from a fresh cryovial. These cells were in turn used to seed a 4-layer Cell Factory systems. To ensure that the cells maintained multipotency after expansion, the expanded cells were seeded in Thermo Scientific™ Nunc™ Multidish 48-well plates and differentiated into osteoblasts or adipocytes. The seeding density chosen for expansion was 350 cells/cm² because it was the lowest seeding concentration displaying good exponential growth. The reported expansion protocol was able to increase the cell number 136-fold; however, since Cell Factory systems are available with up to 40 layers, the expansion potential is virtually limitless. Expansion of hMSCs on the Nunclon Delta surface using mesenchymal stem cell basal medium significantly enhances the osteogenic and adipogenic potential of hMSCs and number of differentiated cells, relative to α-MEM medium. Additionally, the use of a trypsin alternative for cell passage gave a slightly higher yield of adipocytes compared to cells passed using trypsin. The methodology presented here can be applied to the large-scale expansion of other cell types for use in various applications using Cell Factory systems.

Introduction
hMSCs are good candidates for clinical or research use because they are readily expanded in culture, have immunomodulatory potential, and can differentiate into the osteogenic, chondrogenic, and adipogenic lineages. The therapeutic potential of hMSCs is currently being studied as part of clinical trials to treat diseases such as graft-versushost disease[1], osteoarthritis [2], and for the regeneration of cardiac muscle following myocardial infarction.

Whether the requirements are for clinical or research use, obtaining a substantial number of cells can constitute a bottleneck for the investigator. hMSCs display some plasticity in their culture conditions, but several investigators report a higher growth index and increased differentiation potential at lower seeding densities.