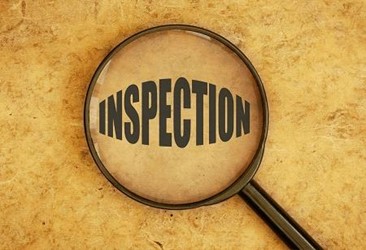 The presentation of data herein differs from data presented on the FDA website, even though it uses the same raw data.  For example, I combine all observation listings that cite 21 CFR 211.192 into a single value. In contrast, the FDA data presents five line items for §211.192, and each identifies the number of times FDA cited the regulation.  Consolidating the citations leads to different conclusions.  In the FDA listing, the most frequently cited item is §211.22(d), “procedures not in writing, fully followed.”  Considering the total number of times that the FDA cited §211.192, §211.188, and §211.160(b), they become numbers one, two, and three, respectively, with §211.22(d) becoming the fourth most frequent citation. The FDA uses the term “frequency,” which appears to be the number of times the agency identified a specific citation in its tabulation.

Table 1 shows only the 15 most frequent inspection observation citations, while the tabulation on the FDA website shows all citations used in the fiscal year.  Table 1 presents those observations from the highest to lowest number for 2017, modified as described in the Introduction section of this paper.  Both Table 1 and Figure 1 show consistency in the years between FY2013 and 2017 with respect to the overall identity of inspection observations.

Investigations, covered in §211.192, remain at the top of the list for all five years, albeit tied last year for that position.  Figure 1 shows a graphic representation of the data from Table 1. In five instances, highlighted in gray in Table 1, the number of times the FDA cited a specific regulation changed markedly in FY2017.

I cannot identify the reason(s) for the differences in the number of times the FDA identified the five citations.  The FDA increasingly focused on over-the-counter (OTC) drug manufacturers in 2017, and many of these inspections cite either lack of, or incomplete, batch records.  Emphasis on laboratory controls and specifications may have increased for similar reasons.  I’ve not seen hard data to suggest reasons why any sections within §211 have either decreased or increased in number. 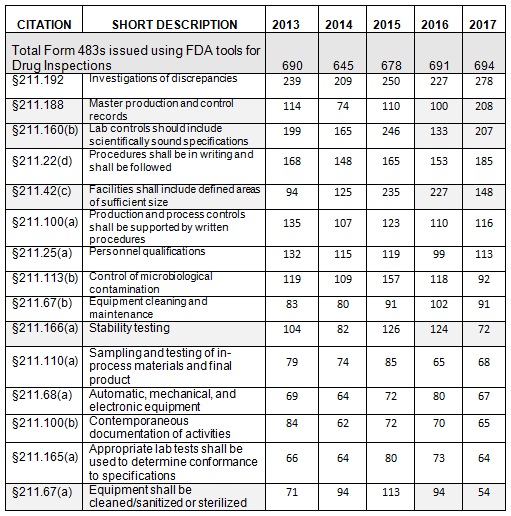 For those who use inspection observations to monitor and improve their quality systems, the FDA’s annual data provides ample resources against which firms can measure their potential vulnerabilities and gauge the probable focus areas during upcoming GMP inspections. The FDA’s focus on investigations consistently scored first on the list of inspection observations over the past five years.  The industry seems to fail here for several reasons:

The dramatic increase in the number of times that the FDA cited §211.188 in 2017 should cause smaller firms and OTC manufacturers to ensure they establish adequate controls for batch record development and execution.

And finally, the lack of adequate written procedures and responsibilities for the quality unit, §211.22(d), remains a very consistent citation over the five years addressed herein. Form 483 observations that include text such as “The Quality Unit is Inadequate…” often result in additional enforcement actions including warning letters.

Barbara received a bachelor's degree in chemistry from the University of Illinois at Urbana-Champaign. You can contact her at bwunger123@gmail.com.