The last 12 months have brought about sought-after breakthroughs in the treatment of underserved progressive multiple sclerosis (MS) patients, and a landmark approval for one new therapy — Genentech’s Ocrevus (ocrelizumab) — may come in March 2017.  In Part 1 of this two-part article, we will explore the landscape that Ocrevus will enter and the factors that will influence its uptake in progressive MS. Part 2 will review Novartis’s siponimod, examine some issues that you should be aware of as you plan ahead for a new era in the treatment of MS, and offer our view of the commercial opportunity in progressive MS.

In the roughly 10 to 15 percent of MS patients with PPMS, the disease is non-relapsing/progressive from the onset, and manifests as steadily accumulating disability — although MRI evidence of inflammation may be observed in some patients. No genetic, imaging, or pathological features clearly distinguish PPMS from the non-relapsing phase of SPMS. Indeed, many MS thought leaders interviewed by Decision Resources Group (DRG) suspect that the mechanistic underpinnings of the two forms of the disease are similar.

The primary goals of MS treatment are to reduce disease activity, delay disability progression, preserve patient function, and maintain quality of life over the long term. These goals are achieved by prescribing chronic monotherapy with approved immunomodulatory disease-modifying therapies (DMTs) to reduce the neuroinflammation that is believed to contribute to permanent neurological damage in MS.

With the August 2016 launch of Biogen/AbbVie’s Zinbryta (daclizumab high-yield process), the armamentarium for the treatment of relapsing forms of MS — including RRMS and relapsing SPMS — comprises 14 DMTs that uniquely balance efficacy, safety, tolerability, and convenience. Although neurologists arguably lack the “perfect” drug — indeed, increasing potency in managing disease activity in MS comes at a cost in safety risk — this remarkable array of oral, injectable, and infusible options allows neurologists and their patients to make personalized, if fairly complex, treatment decisions.

With no approved options, treatment of non-relapsing SPMS and PPMS patients is off-label and involves a fair degree of clinical guesswork; treatment is decided on a case-by-case basis, depending on the patient’s treatment history, clinical activity, and disease course. Generally, neurologists are most likely to reach for MS DMTs if a patient has MRI evidence of active inflammation. Indeed, MS experts generally contend that the risk/benefit balance of available DMTs for non-relapsing MS patients is greatly diminished in patients without active MRI scans. DRG primary research indicates that in 2016, up to 60 percent of SPMS patients (including relapsing patients) in the United States and EU5 (France, Germany, Italy, Spain, United Kingdom) are DMT-treated, while less than half of PPMS patients are prescribed a DMT. This compares to rates exceeding 75 percent for RRMS in most of the major markets. 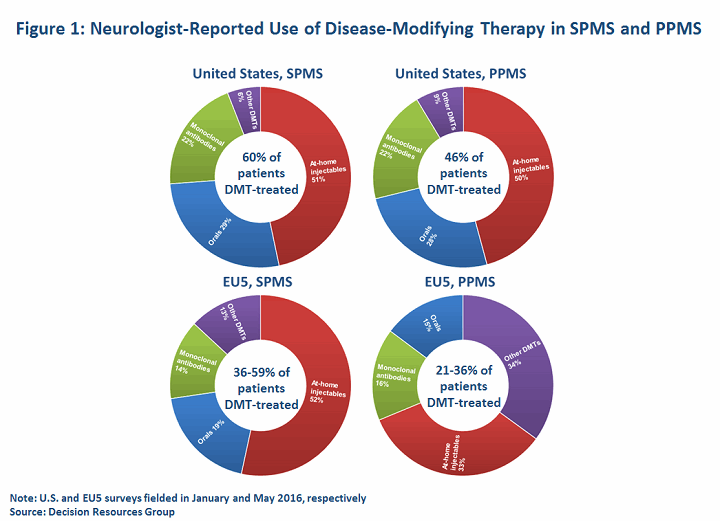 On March 28, 2017, the FDA is due to decide on Ocrevus, Genentech’s B-cell-depleting anti-CD20 mAb. The drug established a highly compelling benefit/risk profile in two positive, IFN-β-controlled (Merck KGaA’s Rebif), Phase III studies in relapsing MS patients. From that data, neurologists interviewed by DRG generally place Ocrevus on the highest tier of anti-inflammatory efficacy among marketed MS DMTs, with the potential for a differentiated safety profile (more on that later). More notably, and building upon prior experience garnered through studies with first-generation anti-CD20 compound Rituxan, Ocrevus also delivered a landmark first-ever success in a large, Phase III, placebo-controlled study in PPMS patients (ORATORIO), for which it holds breakthrough therapy designation from the FDA.

Not Everyone May Benefit From Ocrevus

Ocrevus delivered modest but statistically significant treatment effects over placebo in the 120-week, 732-patient ORATORIO study in PPMS. Results from the trial were first presented at the 31st Congress of the European Committee for the Treatment and Research in Multiple Sclerosis (ECTRIMS) in 2015. The drug outperformed placebo on the primary endpoint, delivering a 24 percent reduction in the risk of disability progression, confirmed at three months (three-month CDP), as measured by the Kurtzke Expanded Disability Status Score (EDSS). Positive secondary endpoints included a 29 percent improvement over placebo in timed 25-foot walk performance, and an 18 percent improvement on volumetric MRI measurements (i.e., brain atrophy).

Key opinion leaders (KOLs) interviewed by DRG unanimously applaud ORATORIO’s positive result, but several contend that the age and MRI activity of the enrolled PPMS population enriched the population and optimized the potential benefit of this potent anti-inflammatory drug. Despite similar EDSS baseline scores (3-6.5) as prior studies testing Novartis’ Gilenya and Teva’s Copaxone (Lublin F et al., Lancet 2016 387(10023):1075-84; Wolinsky J et al., Ann Neurol 2007 61(1):14-24), patients in ORATORIO were, on average, slightly younger (mean of approximately 44) and more likely to have active MRI scans at baseline (approximately 25 percent of patients). Notably, age was capped at 55 in ORATORIO, compared to 65 for other Phase III PPMS trials. A post hoc analysis of ORATORIO also showed that Ocrevus’ impact on disability progression was present, but numerically smaller, in patients without contrast-enhancing lesions at baseline, although the trial was not powered for a statistical comparison between groups.

Based on mounting evidence collected over many years, interviewed KOLs generally expect that Ocrevus is likely to be less beneficial for older progressive MS patients and/or those with inactive MRI scans. However, the demand among PPMS patients will understandably be very strong across the board, regardless of their age or MRI activity. Furthermore, we foresee that many non-relapsing SPMS patients and their neurologists will likely seek treatment with Ocrevus. Despite all this, safety will be the gatekeeper constraining Ocrevus’ uptake in non-relapsing progressive MS patients, as it is in relapsing MS.

So far, Ocrevus’ safety profile in MS program is very strong, but some question marks remain. The most common adverse events associated with Ocrevus treatment in the Phase III MS program were infusion reactions (mostly mild-to-moderate) and non-serious infections (e.g., nasopharyngitis). However, most MS experts interviewed by DRG took note of malignancies that were observed: Four malignancies were reported in the relapsing MS studies, compared with two in the Rebif arm, and 11 malignancies were reported in the Ocrevus arm of ORATORIO, compared with two in the placebo arm (enrollment was 2:1, respectively).

Previous development of Ocrevus in non-MS populations was beset by serious, including opportunistic, infections that led to several fatalities and halted development in those arenas. Although experts express some mild concern over these side effects, they do not extrapolate the risk to MS patients; the diseases are meaningfully different in their clinical characteristics and concomitant medications. Separately, sporadic cases of progressive multifocal leukoencephalopathy (PML) — the singular drawback of Biogen’s Tysabri (natalizumab) in the treatment of MS — have been reported in non-MS patients who received Rituxan. In fact, Rituxan’s label carries a black-box warning for potentially fatal infusion reactions and PML. Ultimately, interviewed KOLs suggest that PML risk could also feature in Ocrevus’ label based on this data, but they consider the risk in MS patients to be remote.

At this point, the chief constraint that may hold back use of Ocrevus, aside from labeling, is doctors’ habit of adopting new drugs slowly, and an ingrained escalation paradigm.

In Part 2, we will turn our attention to Novartis’s siponimod, examine some issues that you should be aware of as you plan ahead for a new era in the treatment of MS, and offer our view of the commercial opportunity in progressive MS.

John Crowley, Ph.D., covers the neurology space as principal business insights analyst in the CNS and Ophthalmology team at DRG. He focuses primarily on MS and epilepsy, and his work entails forecasting, primary market research, and market access, among other topics.

John earned his doctorate from the University of Massachusetts Medical School and his bachelor’s degree from Worcester Polytechnic Institute.  Previously, he was a postdoctoral fellow at Harvard Medical School, studying mechanisms that regulate the strength and dynamics of synapses. You can reach him at jcrowley@teamdrg.com or connect with him on LinkedIn.