The first drug approval for primary-progressive multiple sclerosis (PPMS) may arrive by the end of March 2017, when the FDA is expected to render a decision regarding Genentech’s Ocrevus. In Part 1 of this series, we discussed neurologists’ current management of progressive MS and their receptivity to Ocrevus. Here, we will highlight recent positive data for Novartis’s siponimod in secondary-progressive MS (SPMS), explore key issues to watch as these medications enter the market, and look ahead at the commercial opportunity in progressive MS.

As presented at the 32nd Congress of the European Committee for the Treatment and Research in Multiple Sclerosis (ECTRIMS) conference in September 2016, Novartis’ second-generation S1P-modulator siponimod delivered a 21-percent reduction in the risk of three-month confirmed disability progression (CDP) versus placebo in the Phase III EXPAND study in 1,651 patients with SPMS (relapsing and non-relapsing). Subgroup analyses suggest that the drug’s impact on three-month CDP was most pronounced in younger patients, subjects who experienced a relapse in the two years prior to enrollment, and patients with Gd-enhancing lesions at baseline — qualitatively similar to Ocrevus’ performance in PPMS patients. Siponimod also expectedly outperformed placebo on annualized relapse rate (56 percent reduction), change from baseline in T2 lesion volume (79 percent reduction), and percentage brain volume change from baseline (23 percent improvement). However, the drug failed to separate from placebo on the timed 25-foot walk. At this time, Decision Resources Group (DRG) forecasts a launch for SPMS as early as 2018.

KOLs interviewed are generally excited — and somewhat surprised — by the positive data from EXPAND, since most prior studies in SPMS have yielded negative results, including recent failures recorded by Biogen (with Tysabri) and Opexa Therapeutics (with Tcelna). They consider siponimod’s benefit in SPMS to be relatively modest, and, similar to Ocrevus, they expect the most meaningful benefit in patients with an active inflammatory component to their disease. However, siponimod will hold significant appeal for neurologists and patients given the dearth of approved options and the established comfort and experience with the drug’s familiar mechanism of action (MOA), which it shares with Novartis’ first-generation S1P-modulator, Gilenya. In fact, the two drugs could compete for share among some SPMS patients, such as those with relapses (for whom the product labels will overlap).

Questions Remain That Should Guide Future Development In Progressive MS

Ultimately, Ocrevus and siponimod have established efficacy in non-relapsing progressive MS that is unparalleled by other immune-targeting options approved or in development for MS. Although we forecast the label and evidence base will drive preferential use of both products over off-label relapsing MS options, a healthy proportion of patients are unlikely to get maximal benefits from these immune-targeting drugs.

Here are the questions/issues we’ll be considering — before, and after, December 28:

1. Will the label(s) have restrictions?

Compared with EU regulators, the FDA has taken a conservative tack with the product labels for the last two monoclonal antibodies (mAbs) approved for relapsing forms of MS, Sanofi Genzyme’s Lemtrada (alemtuzumab) and Zinbryta, applying a third-line or later label over concerns regarding the drugs’ safety profiles. Although Ocrevus’ pivotal data projects a standout safety profile among mAbs in MS, concerns may linger given, for instance, the drug’s development history in non-MS populations.

Despite the clean data in MS so far, some MS experts interviewed by DRG see the potential for the FDA to apply restrictions to Ocrevus’ PPMS label to limit patients’ exposure to B-cell depletion when the benefits could be modest or uncertain. In particular, some contend that an age cutoff of 55, to mirror the inclusion criteria of ORATORIO, could be applied. Although some neurologists also believe that a requirement for MRI activity could intuitively factor into labeling language, they suspect that available clinical data does not unequivocally support such an approach for Ocrevus or siponimod.

2. Will European national health authorities limit these drugs’ use?

Following EMA approval, success in country-specific health technology assessments (HTAs) is essential for favorable pricing and reimbursement terms. Health authorities in Europe’s major markets reward drugs that demonstrate cost-effective outcomes in healthcare. In MS, these data-driven assessments have already led to disconnects between guidance for use in a certain country and the drug’s EMA label — even for highly-effective therapies. As a recent example, Lemtrada will be available in France only for severe MS, a much more constrained target population than the EMA label, which guides use more broadly in RRMS patients with active disease — including the potential, albeit unlikely, for first-line use.

3. It’s still a risk-averse prescriber base.

Most neurologists who treat MS are generally conservative and slow to adopt new therapies on grounds of safety and lack of clinical experience. Although the field has increasingly accepted that some fundamental level of risk accompanies strong efficacy in MS, a paradigm of escalation still prevails in relapsing patients, despite ardent support for early, aggressive treatment on the part of some experts.

Although unmet need is pressing in non-relapsing progressive MS patients, neurologists will likely be slow to accept the risks of potent anti-inflammatory drugs in “borderline” treatment candidates. Indeed, MS experts interviewed by DRG, including some aggressive treaters, do not expect to prescribe Ocrevus or siponimod in older and/or inactive patients at launch, but expect that such use may evolve slowly with success over time in clinical practice.

4. Ultimately, the field yearns for neuroprotective, remyelinating, and/or neurorestorative drugs.

Although the statistically significant benefits seen with siponimod and Ocrevus come as a welcome surprise, experts hope it is merely the first step for the treatment of non-relapsing progressive MS patients. Really, the field looks toward novel adjunctive neuroprotective, remyelinating, or neurorestorative agents as the next frontier in treatment. Although the MS pipeline is filling in with such agents, including Teva/Active Biotech’s laquinimod, MediciNova’s ibudilast, and MedDay’s MD-1003 (high-dose biotin), convincing proof of concept for any candidate remains elusive. Biogen’s trail-blazing anti-Lingo-1 agent opicinumab program is advancing the field but also serving as a reminder of the scientific (e.g., identifying/validating relevant MOAs) and technical challenges (e.g., study design, central nervous system penetration [oral versus mAb]) that must be overcome for such therapies to reach the clinic.

Assuming Ocrevus and siponimod are ultimately approved, clinicians, regulators, payers, and HTA authorities will increasingly demand head-to-head comparisons in progressive MS patients (now the norm in relapsing MS drug development) to establish clinical value, justify pricing levels, and inform formulary decision-making. From a mechanistic standpoint, it will likely be a difficult challenge for a purely anti-inflammatory agent to outperform siponimod, and especially Ocrevus, head-to-head as monotherapy in a progressive MS population. Innovative combination therapy approaches may be a better way forward, though health economic considerations will be equally — if not more — important for payers faced with the prospect of bona fide disease-modifying therapy (DMT) polypharmacy in MS.

The Commercial Outlook For Progressive MS

In the end, we expect new agents for progressive MS will help sustain the lucrative but maturing market for MS therapeutics, which, according to DRG data, exceeded $18 billion in the major pharmaceutical markets (United States, France, Germany, Italy, Spain, United Kingdom, Japan) in 2015. We expect sales of emerging therapies for progressive MS, including Ocrevus and siponimod, to surpass $6 billion combined by 2025, while sales of today’s DMTs are diminished by both the enhanced competition and the launch of key generics. 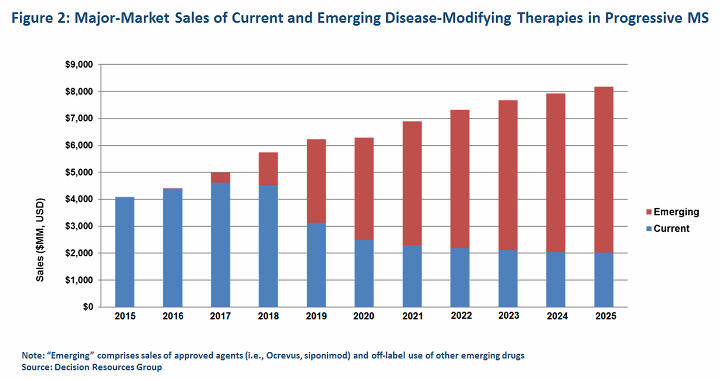 John Crowley, Ph.D., covers the neurology space as principal business insights analyst in the CNS and Ophthalmology team at DRG. He focuses primarily on MS and epilepsy, and his work entails forecasting, primary market research, and market access, among other topics.

John earned his doctorate from the University of Massachusetts Medical School and his bachelor’s degree from Worcester Polytechnic Institute.  Previously, he was a postdoctoral fellow at Harvard Medical School, studying mechanisms that regulate the strength and dynamics of synapses. You can reach him at jcrowley@teamdrg.com or connect with him on LinkedIn.