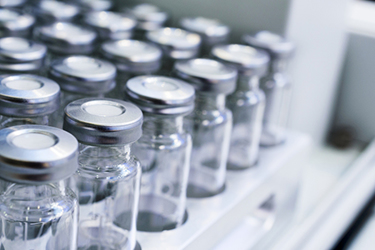 Parenteral products, specifically Vials, both glass and, increasingly, polymeric vials, represent one of the most common package systems historically tested by helium leak detection, largely due to their continued dominance as a package system for high-potency drugs requiring utmost protection. The primary sealing interface of a traditional vial system is between the elastomeric closure and land seal of a vial, physically compressed together by a crimped aluminum seal.

There are numerous scientific studies demonstrating helium-based test methods as an optimal leak testing solution for these package systems fitted with rubber stoppers and crimped seals, comparing helium leak rates to risk of microbial ingress, for example. While studies can be performed to simply evaluate the integrity of closed vials, more complex study designs are also possible, such as the comparison of different component configurations, dimensions, and assembly parameters. The sensitivity of helium leak detection allows for differentiation not attainable many other leak test methods. Helium leak detection has also been successfully used to validate assembly lines for CCI and in routine analysis of samples for quality control monitoring or in support of stability studies.

Custom fixturing as engineered by LDA allows for multiple modes of testing for glass or plastic vials, including isolating the sealing region, filling and testing previously sealed vials with our vial filler and HSAM, or even assessing container performance at cold storage conditions down to -80°C, a common challenge condition for modern drugs requiring deep cold storage and transport.