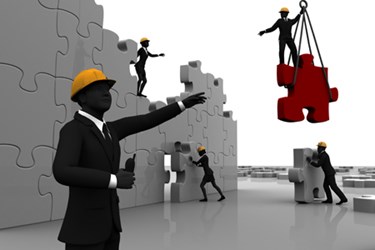 The business needs of the pharmaceutical industry are evolving. Over the past five years, breakthrough therapies for oncology and rare and orphan diseases have placed increased pressure on drugmakers to accelerate product development while reducing development costs. Meanwhile, with the rise of precision medicine, pharmaceutical manufacturers are now expected to quickly produce a wide variety of products at significantly lower volumes.

With PCMM manufacturing, Pfizer partners with GEA and G-CON Manufacturing to produce prefabricated pharmaceutical manufacturing PODs. These PODs are essentially different components of a pharmaceutical continuous manufacturing line (e.g. processing equipment, control systems, cleanrooms) that are produced as separate modules and shipped to a central warehouse facility for quick assembly. For its initial PCMM manufacturing pilot, Pfizer had prefabricated PODs produced in Belgium and Texas respectively. The company then had these units shipped to its Groton, CT, warehouse for assembly and operation. Videos illustrating the general POD concept can be viewed here.

How PCMM Differs From Other Modular Approaches

At first blush, Pfizer’s PCMM initiative may sound a lot like other modular or flexible manufacturing approaches in play throughout the industry. However, according to Phillip R. Nixon, Ph.D., Pfizer’s Executive Director of Drug Product Technology & Innovation Lead, there are a few key characteristics that differentiate Pfizer’s PCMM approach from other modular manufacturing techniques.

“With other modular manufacturing approaches, many of the parts are pre-engineered and prefabricated, but in the end, they are basically assembled to be a fixed facility,” says Nixon. “Those units aren’t designed to be disassembled and redeployed for another purpose at a later time. Our PODs are. Furthermore, other modular units need to have HVAC and other utilities added to them upon arrival. Our PODs are self-contained and autonomous. They all have built-in air handling and utilities, so they can be quickly integrated. We believe these differentiators make our PCMM approach faster and more flexible than other modular continuous manufacturing models.”

According to Nixon, there are several operational advantages to Pfizer’s PCMM manufacturing approach:

Pfizer formally launched the PCMM concept in September 2013. In about a year, the company worked with its partners GEA and G-CON Manufacturing to produce the prefabricated units for its pilot launch. These units were shipped to Pfizer’s Groton, CT, warehouse in early 2015 and were fully assembled and operating within a couple of weeks. Currently, the PCMM facility is going through the FDA’s site qualification and calibration process. Nixon admits this process is lengthy, yet he states that elements of the PCMM model can help accelerate steps of the regulatory approval cycle.

“Because PCMM units are prefabricated, we can actually have many of the qualification and validation exercises performed on each unit at the vendor location and not repeat this activity once the units are assembled at the final warehouse site,” he says. “Not only does this help accelerate these processes, but we believe it will help actually reduce the cost of validation over time because the practice will become somewhat standardized.”

Once approved by the FDA, Pfizer has some extensive experimentation planned for its Groton PCMM facility. “We want to put the equipment through its paces and gain additional process understanding,” says Nixon. “We plan to experiment with different formulations and run various materials with different properties through the system. This will not only allow us to run the PCMM equipment with a greater degree of confidence than we do now, but it will also provide us with the data necessary to refine our engineering and computational models.”

Ultimately, Pfizer hopes to start developing new chemical entities and products using the PCMM units by the end of 2015. However, the company’s vision for PCMM technology extends much further than its own enterprise.

“We’d really like to see PCMM technology become an industry standard that is used throughout the entire pharmaceutical sector,” says Nixon. “We’re hopeful that pharma companies can find a way to collaborate to form multi-company POD farms where different drugmakers share large warehouse facilities with a central utility spine and produce their own products using different POD configurations. Because each company would own the process and product inside each POD, confidentiality and proprietary corporate information would be protected. However, the shared infrastructure could help significantly reduce the overhead costs associated with pharmaceutical production as well as the regulatory approval cycle.”