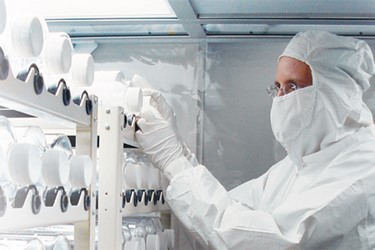 A third-party study was conducted to compare the performance of Thermo Scientific™ Nunc™ Roller Bottles (1.2 and 2.5X) and 850 cm2 roller bottles from another supplier, for the culturing of ST, Vero, and MDBK cells. Cells were seeded at relatively low density into each bottle and allowed to grow to confluence. At confluence, cells were harvested and passaged at the same density into new bottles; this was repeated 4 times, or until the culture failed to produce enough cells to seed. Confluency at 24, 48, 72, 96, and 120 hours was estimated visually. Cell counts per bottle (yield), as well as count per unit of surface area and percent viability, were determined at the end of each passage. Nunc Roller Bottles performed as well as or better than the alternative 850 cm2 bottles with all cell lines tested.