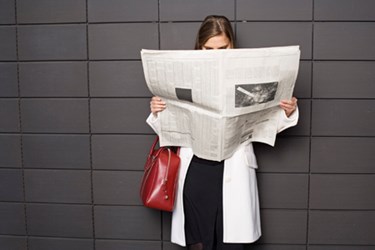 I often write – and you read – about those individuals at biopharma companies openly enthusiastic about outsourcing. In common is a partiality to sharing strategies and best practices with anybody who’ll listen. These people have come to believe in a camaraderie of industry; a rising tide lifts all boats.

Not too long ago, though, I ran into a person at an Outsourced Pharma conference who seemed to outdo the others in absolute embrace of this model.

But here’s the catch: Her company won’t allow her enthusiasm to be shared “on the record.”

It’s not the first time we’ve encountered this, but these experiences have become few and far between. The particular company I’m referring to above reproved our enthusiastic executive: “Talking in too much detail about outsourcing reveals our strategy,” she was told.

Well. It’s particularly ironic I hear of this on the day we published an editorial with Rod MacLea of Amgen, in which Rod states about outsourcing: “We’re determined to spread these concepts, and share the knowledge obtained, as the entire industry takes on this way of thinking.”

So here’s what we’ll do: Fully protect the confidentiality of our “source,” but also continue the Outsourced Pharma mission to support this era of openness in our industry. I believe the enthusiasm and opinions that were shared with me are well worth sharing with you. Of “Sally” we’ll only reveal that she sure knows her supply chains. She’s an accomplished executive who for many years has enthusiastically taken advantage of drug development and manufacturing outsourcing for commercial products.

For her, outsourcing starts with a few fundamental components. Two we’ll discuss here are what she calls “leveraged risk” and “the question of quality.” Sally also sees three trends working their way through the industry. Those are also worth sharing in a follow-on piece.

“I actually like getting into a philosophical discussion with people about whether outsourcing really is more risky,” Sally says with what appears itself to be a metaphysical smile. “If done right, I don’t think it is. I find it surprising some people still do.”

She flashes back to her early days in the industry, when the biopharma company she worked at (happily) found itself in need of manufacturing facilities for a series of newly approved commercial products. Sally recalls the company seriously considered building it’s own factories, at the cost of hundreds of millions of dollars. That money, she says, was in fact much more wisely spent investing in clinical trials and other areas.

“From that time, I’ve always thought of the word ‘leverage,’” she explains. “Even if you are a company with that kind of money, it’s often not the best decision to invest in buildings and equipment. Doesn’t it make more sense to take the opportunity to leverage the people and expertise in existing physical plants – sometimes with intellectual property – without a large upfront investment?”

She continues: “I like to compare it to buying a house at five percent down. The price doubles, you’ve made a huge return on your five percent. It’s a very powerful model.”

However, like all financing, it’s also a model that comes with inherent risks. Sally agrees to this, but quickly adds that the biopharma outsourcing model affords various ways to mitigate and manage those risks. In fact, this is part of the model’s allure in the first place.

For example, the risk to a high gross-margin biopharma product is mitigated by maintaining a larger inventory, and/or by securing a backup manufacturing site, both options made possible by leveraging capacity and services at external providers. Neither requires major investments. “In most cases, you effectively have no financial impact to your company, or risk with inventory,” Sally says.

She then considers a pharmaceutical company in need of tablet production. “First, there’s almost always many places that can accomplish that for you. Why not, then, qualify two sites from the start? Give each a meaningful amount of business, and in so doing automatically mitigate any supply risks. You’re actually in a better position than a company with its own single plant.”

She continues: “You’d spend hundreds of millions to build your own plant, versus working with CMOs – who already have vast experience in the business – for a fraction of the cost. Second, you’ve got the two qualified sites to ensure supply. Even if your company owns a plant, it’s often wise to supplement supply from an external party. If you use outsourcing strategically, you actually mitigate supply-chain risk, not add to it.

Sally then says she had this argument with her “insurance people.”

“They said if you outsource, you introduce more risk. I said, ‘Actually, just the opposite. We’ve now got backups on key brands with a small financial investment upfront.’”

The Question Of Quality?

Sally doesn’t side with the oft-expressed homily that when it comes to quality, as a general rule CMOs aren’t as capable as a sponsor’s internal resources. “Frankly, I strongly disagree with the argument quality becomes an issue because you outsource,” she says.

She points out that CMOs have vast experience, and are “fully entrenched in their own GMP facilities,” so understand how to work best in that quality environment. At the same time, she says, biopharma companies “can select CMOs based on our own, rigorous evaluation of their abilities. This includes, at times, establishing quality systems required for specific products. I do agree rigorous upfront and continuous evaluation is also critical.”

To be clear, Sally’s enthusiasm for outsourcing isn’t derived from a career of all positive experiences. She has had her share of less-than-successful results from outsourcing activities. Most of those, she says, have come particularly with suppliers selected for their lower pricing. This, she says, keeps her predisposed to focus closely on total value – price, quality and reliability – for each external partner.

“I only work with CMO’s that have excellent reputation for quality,” she continues. “Cost savings are quickly lost with even one batch of API or finished goods. We have partnerships with CMOs around the world, but I also think the entire industry is realizing that low-cost suppliers can turn out as not the best value in the long run.”

Sally pauses from our conversation to look around the Outsourced Pharma conference room. When she turns back to me, she says: “I’m just a true believer in this outsourcing model. For me, it’s a fun space to be in. I’m a deal maker, I guess you’d say, so it’s a good fit.”

And then this: “I like that today our industry has an outsourcing-focused conference that brings us all together. Twenty years ago, people simply worked in isolated settings. Now we’re a broader discipline of our own. I think we’re becoming a kindred spirit.”

Here’s hoping her company catches the spirit, too.