The California Drought's Impact On Pharma 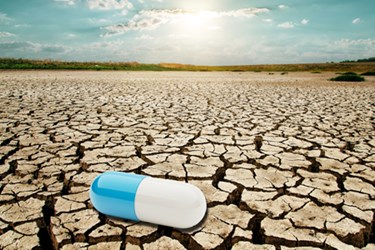 The ongoing drought in California is now well into its fourth year and the crisis is taking a heavy toll on area residents and businesses. Back in April, Governor Jerry Brown signed an executive order requiring cities and towns to reduce water consumption by 25 percent or face hefty fines. These restrictions have far-reaching ramifications on industries such as agriculture and food processing which rely on heavy water use. While not as significantly impacted as these sectors, pharmaceutical companies based in California have their own drought-related challenges to contend with. Most notably, the water shortage has made it increasingly difficult for pharmaceutical companies to secure the wastewater discharge permits necessary to manufacture drugs in the state.

Pharmaceutical manufacturing is a very different process than R&D, especially in the eyes of the FDA and EPA. As such, both processes require different wastewater discharge permits. There have historically been (and continue to be) few restrictions attached to securing an industrial user discharge permit for a pharmaceutical R&D facility. To date, the drought has had little impact on this activity.

The same, however, can’t be said for acquiring a wastewater permit for manufacturing. As a manufacturer, a pharmaceutical company is required to comply with section 439 subpart D of the Code of Federal Regulations which requires specific sampling of wastewater. According to some, the California drought has caused local wastewater departments to be more stringent when determining regulatory adherence to the Code and ultimately issuing these permits.

For example, reports indicate that soon after a California-based pharmaceutical company changes it’s SIC (Standard Industrial Classification) code or submits a drug application with the FDA, this information is reported back to the EPA, and the local industrial wastewater department is called in for a detailed inspection of the facility infrastructure and its wastewater discharge processes. The heightened effort to protect the California drinking water supply from harmful substances (such as isopropyl alcohol) is understandable given the severe water shortages in the region. However, many believe certain industries (including the pharmaceutical sector) are being unfairly targeted in this initiative, and the added scrutiny is making it increasingly difficult for smaller pharmaceutical manufacturers to do business in California.

The manner in which the 439 subpart D regulation is worded creates additional headaches for smaller pharmaceutical manufacturers in the region. In essence, the rule is written for 24-hour continuous discharge and not batch processing environments. Many smaller pharmaceutical companies only manufacture products in small batches, so complying with a regulation that only addresses continuous workflows can be confusing and difficult for these smaller facilities.

Smaller pharmaceutical companies don’t have the same wealth of resources as these larger organizations. For example, many small pharmaceutical operations are based in a suite of an office building and few have the capital necessary to invest in additional manufacturing facilities and/or infrastructure enhancements. The plan for many of these companies has been to manufacture their products in the same facility in which they perform R&D. However, the 439 subpart D regulation requires that all water attached to the manufacturing process be tested. Most pharmaceutical companies don’t want their R&D discharges to be considered as part of their manufacturing process because these samples would rarely pass the testing requirements. Because of this, separate water lines for R&D and manufacturing are generally desired.

If a pharmaceutical company doesn’t have a water line it can prove is dedicated to manufacturing, then the wastewater department requires grab samples be collected and tested at each point in the process. There can be as many as eight or ten points that need sampling, particularly if company is manufacturing a liquid medication on one line and pills on another. These wastewater samples must be collected four times per year by the wastewater department and another 4 times by the manufacturer — which can be prohibitively complicated and expensive, especially considering the pharmaceutical company must pay for all eight tests.

Not surprisingly, if a pharmaceutical company begins manufacturing a drug before the facility has the proper wastewater permit, the industrial wastewater department will begin to levy fines and cite the organization for noncompliance. However, it seems many smaller pharmaceutical companies that have historically done just R&D are unaware they are subject to different wastewater requirements once they start manufacturing product in California. In other words, these facilities have no idea that they’re doing anything wrong until a case has been filed against them. Obviously, there is a need for better education is this area.

On the flip side, once these pharmaceutical companies are made aware of the different wastewater requirements, they then must jump through several hoops (many of which have been even more demanding in light of the drought) in order to get verified for the manufacturing-grade permit. Some smaller California-based pharmaceutical companies have been able to make the necessary adjustments to secure these permits even with a limited budget.

For example, some have purchased adjoining office suites — one dedicated to R&D and the other to manufacturing — and modified the space to support two separate water lines in order to meet the specific wastewater demands of these distinct processes. However, this isn’t always a viable option and a manufacturer must be able to present the infrastructure plans to the local wastewater department for approval, which is a lengthy process (i.e. a minimum of six months).

There is no debate that the conservation and preservation of clean, drinkable water should remain California’s top priority. However, some pharma industry advocates believe adjustments could be made to 439 subpart D to eliminate much of the confusion surrounding the regulation and make it easier for smaller pharmaceutical manufacturers to comply with. For example, the rule could be rewritten to clearly address the different workflows of both continuous and small batch manufacturing.

California is hopeful that the forthcoming El Niño will finally help alleviate some of the ill effects of the drought. However, even if the heavy rains do come, water shortages will remain an ongoing problem in The Golden State. Moreover, for some industries, the drought has already caused damage that will take years to repair. It will be interesting to see how drought conditions will continue to impact pharmaceutical companies in California, and the ripple effect this creates industry wide.